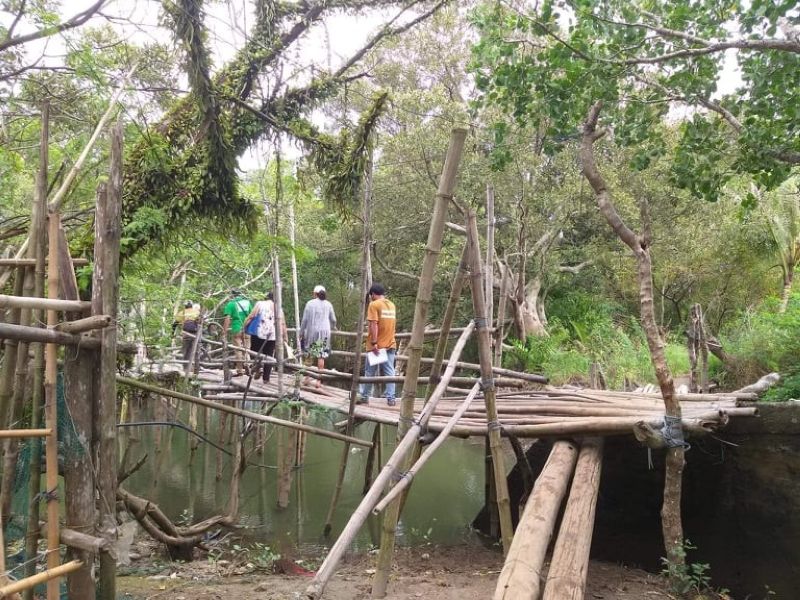 BACOLOD. Some of the members of Negros Environmental Watch composed of various groups, including the Green Alert Negros, visit one of the coastal communities in E.B. Magalona town recently where the dredging, declogging and desiltation project is underway. (Contributed photo)

Not only that, it also threatens the existence of the crab itself, it added.

The Green Alert Negros (GAN), in a statement, said the activity is only a facade to the interest of extracting or mining the black sand or magnetite since the said minerals will be transported and sold elsewhere for processing.

The group recalled that in March this year, the Department of Environment and Natural Resources (DENR) granted the First Terradev Corp. and Geo Alto Mineral Inc. their Environmental Compliance Certificate (ECC) to operate the dredging, declogging and desiltation project to reduce the risk of flooding.

The GAN said there will be a dredging at the three rivers of the town namely Imbang, Malogo, and Madalag and Batea Rivers of around 60 hectares. They will be extracting a total of 4,075,600 cubic meters per year of magnetite sand from the said rivers.

"The ECC does not also provide the duration of their operation which means they can operate as long as they want," the group said, as it warned that the project will destroy the marine ecosystems and endanger the local blue swimming crab industry which has been generating billions of revenues.

Its coordinator Elmeer Meeynard Calimpos asserted that the coast of E.B. Magalona is very rich in magnetite which is used in the foundry as an additive to prevent surface defects of the casted metal.

Calimpos said another use is for heat storage or as an iron source for iron catalysts. As an iron catalyst, it improves or increases the rate of reaction in chemical processes by reducing the activation energy or changing the reaction mechanism.

"We reiterate that the extraction of minerals such as sand, gravel and black sand-magnetite will negatively affect marine biodiversity in general," he said, adding that dredging releases harmful substances and increases the turbidity of the water and litters toxic metals throughout the food chain.

The GAN further claimed that, more importantly, the destruction of natural defenses like the sand bar from strong waves and storm surge during typhoons would weaken thus, increase the disaster risks of the surrounding communities.

Also, the blue crab value chain would be completely disarrayed, it stressed.

In terms of economic aspect, the group cited E.B. Magalona as home to the blue swimming crabs which put Negros Occidental in the map as a major producer.

In 2019, the province has produced an average of about five tons of blue swimming crabs per day which is mostly for exports.

Citing data from the Bureau of Fisheries and Aquatic Resources, the Metro Bacolod Chamber of Commerce and Industry earlier said that it is considered as the fourth biggest processed seafood products for export in the country with a revenue that reached 8 billion in 2016.

For Calimpos, it is also mind-boggling because the Provincial Government passed a resolution putting a price of P2.50 per cubic meter of extracted black sand magnetite whereby the LGU will only earn P10,198,000 per year compared to the blue crab's industry that already generated P8 billion.

"The said project is both environmentally destructive and financially unbeneficial to the province," he added.

It can be recalled that the last public hearing for the project in February this year, First Terradev Corp. president and chief executive officer Eric Tagle said it is a public-private partnership where the government made the plans and will direct the project.

Tagle also said their firm has been ready for the project since August 2019.

He said they have been in the business of dredging for almost eight years and has vast experience in dredging both in the Philippines and other southeast Asian countries.

"We will fully comply with government laws and regulations imposed on the project we will undertake in E.B. Magalona," Tagle added.

Also during the public hearing, E.B. Magalona Mayor Marvin Malacon said the project is the answer to the flooding problem of the town.

Malacon said the contractor is required to pay taxes to the government.

"We want the share of the barangays to be put in a common fund to be managed by the municipal government to ensure that its utilization is regulated and the people will benefit from it," he pointed out.

Malacon also called the environment groups opposing the project as "ignorant of the project."

"They keep on asking the same questions some of which were irrelevant and nonsense. But we need to address all their inquiries," he had said.