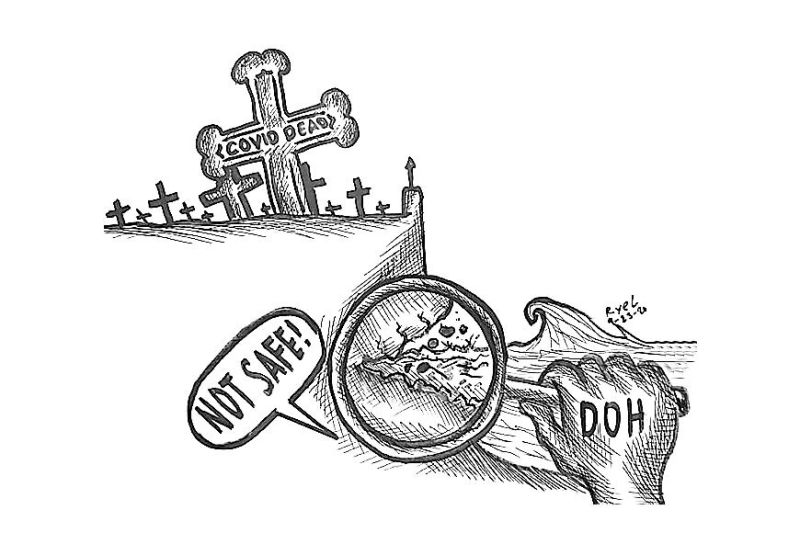 So it took the Department of Health (DOH) to hold the City Government’s Sapangdaku cemetery project. In mid-June this year, amidst issues of rising cremation cost of the Covid dead, Cebu City Mayor Edgardo Labella certified as urgent the draft ordinance that was supposedly to pave the way for the project.

To recall, initial talks on the project were inclusively among City and village officials with Department of Environment and Natural Resources Secretary Roy Cimatu, who inspected the site himself.

It wasn’t made clear to the public why the city eventually opted for the burial ground over purchasing a cremation equipment or a refrigerated container. Much of the discussions revolved around compliance with environmental requirements, particularly on the cutting of trees, among others, which was why the project was moved to Sapangdaku because the initial site identified was the five-hectare lot in Sitio Katives in Barangay Guba, which falls under the Cebu Protected Landscape Area.

Under Section 3 of the Sanitation Code of the Philippines (PD 856), the establishment of a burial ground needs the certification of a DOH sanitary engineer, who determines the suitability of the lot to be used for the cemetery. The factors to be looked into include: “depth of water table during the dry and rainy seasons, highest flood level, directions of run-off, drainage disposal, the distance of any dwelling houses within the 25-meter zone and drilling of a well or any source of potable water within the 50-meter zone.”

Mary Jean Loreche, DOH 7 spokesperson, said the agency found that the proposed site is located near a river and is prone to landslide. For one moment, the DOH seemed to be stepping on DENR territory, the matter of landslides being under the turf of the Mines and Geosciences Bureau.

PD 856, however, is clear that the DOH plays special role in determining the suitability of a proposed burial site.

What makes the DOH’s say on the matter even more crucial is that the proposed cemetery supposedly involves the dead from the highly communicable disease of Covid-19. To be slack on its role in determining a burial site dedicated to the Covid-19 dead is perfect recipe for disaster.

The mayor intends to have a dialogue with DENR and DOH officials, but we’d like to think that on this matter, the decisions should be informed more rationally by the DOH’s view. That it had decided on the “unsuitability” of the site must shut the project right off. Officials must go back to the drawing table and reimagine more options. The risk is not just on the environment, but also on public health.