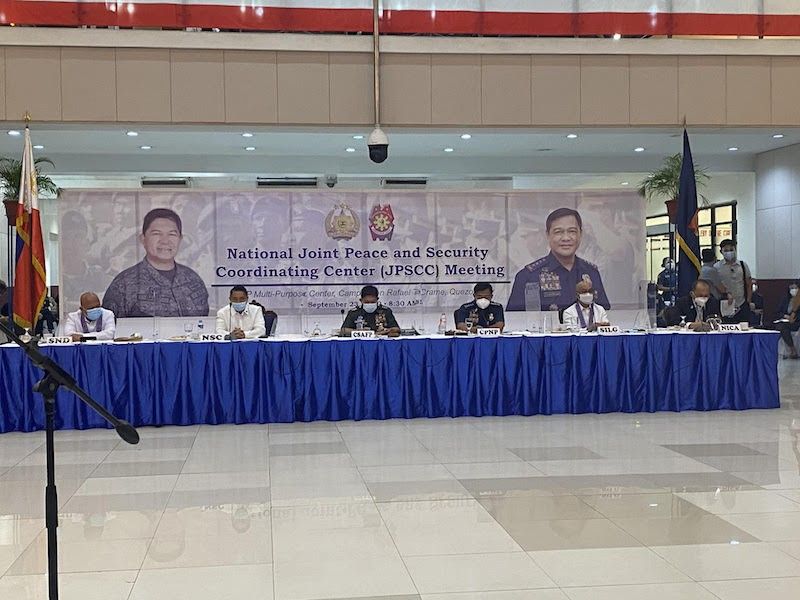 THE Philippine National Police (PNP) and the Armed Forces of the Philippines (AFP) along with other concerned government agencies vowed Wednesday, September 23, 2020, to further strengthen the fight against insurgency and terrorism.

“The main objective of this JSCC meeting is to review ‘yung aming joint update plan with AFP, PNP in addressing various security threats being faced by our country today like the CPP-NPA (Communist Party of the Philippines – New People’s Army), local terrorist groups as well as ‘yung mga criminal elements,” said Gapay.

“Dito tinitingnan namin dito what we have accomplished, the best practices and the gaps which we have experienced, problems encountered in the implementation of the joint campaign plan and come up with solutions and measures to correct them with the end view of performing very well and achieving the campaign objectives within the prescribed timelines,” he added.

The event was witnessed by other officials from the Department of the Interior and Local Government, Department of National Defense, National Security Council and National Intelligence Coordinating Agency (NICA).

Gapay maintained that they aim to resolve the country’s problem on insurgency before the term of President Rodrigo Duterte ends in 2022.

Among the highlights of the new guidelines are the continued strengthening of coordination and cooperation with the local government units, the implementation of economic and livelihood programs and the beefing up of monitoring and information dissemination through social media.

Gapay noted that poverty and lack of information about the government’s program to address it remains to be one of the root of insurgency.

agencies, other sectors of society to address not only the armed component but most especially the root causes of insurgency,” he said.

“Sabi ko nga matagal na ito, nandyan ang NPA so we are asking ourselves bakit nandyan pa sila. This is because may narerecruit pa sila, meron silang naextort. They were able to generate some funds and resources to really try and perpetrate itong kanilang mga terroristic acts...These things will be perfectly addressed by other governmet agencies because this involve socio-economic intervention, even good governance on the part of LGUs and politicians and more livelihood and employment opportunities for our citizens lalo na ‘yung nandun sa remote areas and marginalized sector,” he added.

Cascolan, for his part, said the PNP will have a focused unit for anti-insurgency campaign, which is the Directorate for Integrated Police Operations (DIPO).

“They will be going down, be very visible in all these insurgency areas and be able to come up with what you call the area public safety battalions. They will have their own force of which will be part of their coordination with the AFP,” he said.

Meantime, both the PNP and AFP distanced itself from the fake social media accounts that were taken down by Facebook over “coordinated inauthenticated behavior.”

“They posted primarily in Filipino and English about local news and events, including domestic politics, the military’s activity against terrorism, the draft of the pending anti-terrorism bill, criticism of communism, youth activists and the opposition, criticism of the Communist Party of the Philippines and its military wing the New People’s Army, and the National Democratic Front of the Philippines,” Gleicher said.

Gapay and Cascolan maintained that the PNP and AFP are managing social media accounts in compliance with the standards of the company.

“Official Facebook pages of the PNP and lower units are compliant with standards and we continue to serve its purpose along these objectives,” said Cascolan.

AFP spokesperson Major General Edgard Arevalo said they were looking into the said report and will coordinate with Facebook about it.

He said there are no accounts maintained by the AFP that were shut down or removed by Facebook. (SunStar Philippines)