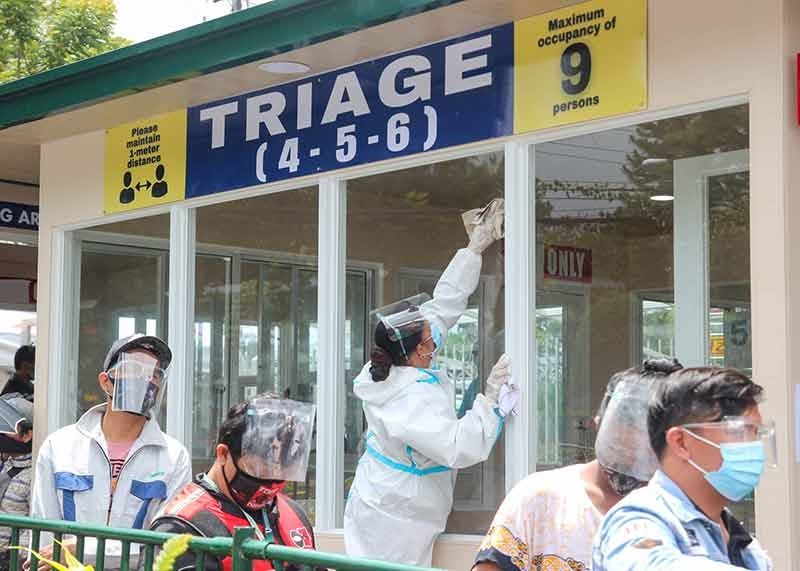 CLEANLINESS KEEPS COVID AWAY. Dressed in complete personal protective equipment, a utility worker sprays disinfectant to make sure the triage at the Baguio Convention Center is clean. (Photo by Jean Nicole Cortes)

CORONAVIRUS cases recorded in the Cordillera Administrative Region (CAR) increased by 37.6 percent since September 9, 2020, according to the Department of Health (DOH).

As of September 23, a total of 87,416 or 4.8 percent of individuals out of the 1.8 million population in CAR have been tested, with 1,215 or 1.39 percent confirmed positive. Kalinga Province has the highest number at a 3.6 percent positivity rate.

Doctor Ruby Constantino, DOH–CAR regional director, said case doubling time in the region is at 17.4 days, while the critical care utilization rate was at 41 percent with more males affected at 50.8 percent.

“Out of the 1,215 cases recorded, 273 are still admitted but are in stable condition, while 11 are severe and two critical cases are closely being monitored and observed,” Constantino said.

“Before, there was a time wherein the testing of BGHMC (Baguio General Hospital and Medical Center) was only limited to the risk population and, eventually, expanded through the National Red Cross,” Constantino added.

DOH-CAR reported that out of the 72 municipalities, 58 or 76.3 percent have a clustering of cases.