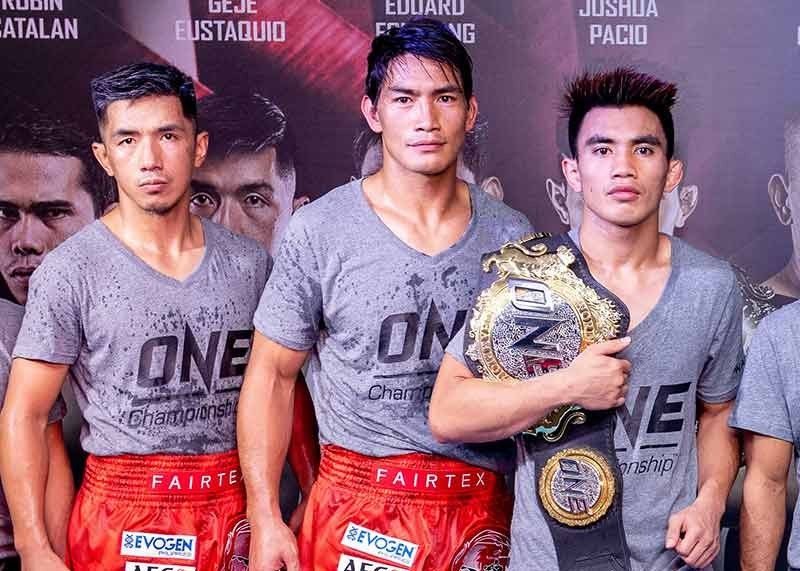 REJUVENATED. Former world champions Geje Eustaquio and Eduard Folayang weigh in on the current state of Baguio City during the Covid-19 pandemic, and they’re loving nature’s return to form. With them is ONE strawweight world champion Joshua Pacio. (ONE photo)

THE lockdown period since March this year not only benefitted Baguio City’s environment but also brought back some memories for Team Lakay fighters Eduard Folayang and Geje Eustaquio.

Folayang and Eustaquio, both former world champions competing for the Singapore-based martial arts organization, ONE Championship, weighed in on the current state of their hometown during the Covid-19 pandemic, and they’re loving nature’s return to form.

“This lockdown period was great for the local community because it became a lot quieter. There was no traffic or pollution,” said Folayang. “The environment hit the reset button and allowed nature to flourish. It was a good opportunity for the environment to recover.”

Eustaquio, on the other hand, said seeing his hometown in such a calm and relaxed state brings back memories of his childhood when a then-Baguio City was just beginning to develop.

“It’s fun to experience this once in a lifetime. Movement in Baguio City is easy now. There’s no traffic and the environment is even more beautiful now than ever. It looks so much better than before,” said Eustaquio. “The environment has recovered very quickly. Certain types of birds are back, and you can see living nature right inside the city. When I was a kid, I could see these animals and plants, until they slowly disappeared due to pollution. Baguio City went through a lot of urban development, which had an adverse effect on nature. Now, nature is making a comeback.”

Baguio City is known as the Summer Capital of the Philippines. Citizens flock to the mountain city to enjoy its cool weather, fresh mountain air and lush greenery.

Due to nationwide lockdowns brought about by the effect of the Covid-19 pandemic, however, Baguio City’s local economy was hit particularly hard.

Though Folayang and Eustaquio both appreciate nature’s wonderful recovery in their hometown, the two Team Lakay veterans also understand how important it is for Baguio City to gradually reopen its gates back up to outsiders in order for its local economy to recover.

“I think for Baguio City, tourism has always been very important. It’s one of the top tourist destinations in the country. Unfortunately, due to the pandemic, Baguio City had to close its doors. Local businesses suffered and a lot of people lost their jobs,” said Folayang. “As things start to reopen now, I am sure it will give a much-needed boost to the local economy and things will start to get busy again.”

“Tourism is the bread and butter of Baguio City. Hotels, restaurants -- literally everything suffered because of the pandemic. For our community, it is very important that tourism restarts in Baguio City and goes back to normal,” Eustaquio concluded.