Young Dabawenyos to watch out for 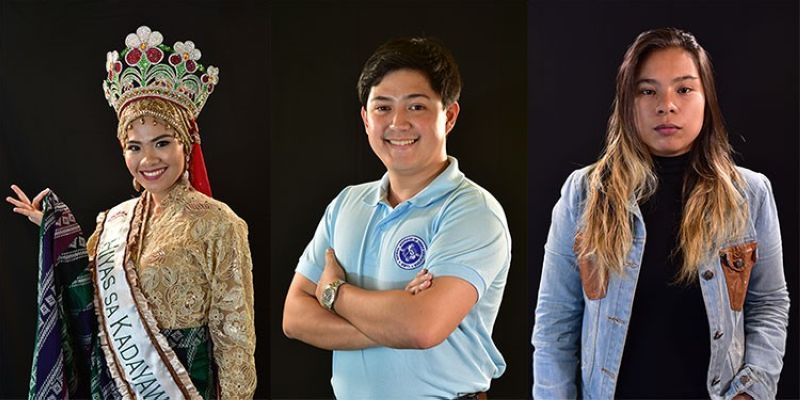 AT THIS day and age, the youths are somehow expected to be the ones to ignite change in the community. The older generations have done their share when they were younger and now guides the young ones through life. In Davao City, there are a lot of youths whose advocacy and leadership leaves traces for both the younger and the older generation to be inspired and be motivated to also do their share in the community.

We talked with Hiyas sa Kadayawan 2019 Nurainie Ampatuan, City Councilor Javi Campos, and musician Thea Pitogo and discovered the challenges and the victories they faced before reaching where they are now.

Before she was hailed the Hiyas sa Kadayawan last year, Nurainie had been managing Hilyah since 2018 right after she graduated Fashion Design from the Philippine Women's College. Hilyah, from the Arabic word which means "ornaments," promotes Filipino-Moro culture in the country. Her clothing primarily promotes ready-to-wear modest clothing.

Nurainie believes that being a Maguindanaon and a designer entails a huge responsibility for her towards the community. Her designs make use of the Inaul fabric while keeping the styles modest and wearable at the same time. Inaul fabric is important for their culture as it traces back to the history, roots, and identity of Maguindanao.

When she joined the Hiyas sa Kadayawan last year, what she found challenging is finding something she can perform during the cultural performance segment. But this challenge made her understand more about their tribe and culture as well as their musical instruments. She took this challenge and ended up performing a Maguindanaon lullaby and poetry, Bayuk.

"The younger generation should recognize and discover our culture. It identifies us as Filipinos. We should be proud of wearing these designs with patterns from our different IP communities," said Nurainie.

It's no secret that Javi Campos is Davao City's youngest elected councilor. But take nothing against his age because, at 28, he can lead and make his way through older councilors like he was tailored to fit to do it since he was young.

Ever since he was very little, Javi had been exposed to life in politics and leadership. Born in a family of politicians, he already met with VIPs, senators' children, and other politicians. Growing up in this kind of world has made him inspired and motivated to pursue his path towards the same direction. He tried his best in leading as young as in grade school and in high school. Eventually, he learned the nooks and crannies along the way.

When he was given a chance to lead in Davao City, he began engaging the youth with activities, Liga sa Agdao, and gave out wheelchairs and canes for persons with disabilities.

"No matter what you do, problems and challenges will always be there. You realize that you can't do it alone. You need to have a good tandem and partners," said Javi, who is also thankful to have fellow councilors who believe in him despite their age gap.

Knowing that the youth makes up the majority of the city's population, he said it is important that they have a voice in the council like him to help them air their concerns and sentiments. In his three years as a city councilor, he plans to help make developments more sustainable, help create solutions for traffic and flooding, and to emphasize the importance of the youth in the city and the contributions they are capable of.

If you're into local indie music, chances are you've heard of Thea Pitogo and her music before. She began songwriting when she was as young as 12 years old. But it was only four years after that that she dipped into the music industry joining gigs with her band at 16.

She describes their music back then as pop-ish. The band's voice is thought to be unique and talks of love and happiness and about being happy.

"I realize I dreamed of creating music and not just appreciate it," she said. Eventually, she and the band got discovered by Studio One Management and signed a contract with them. It was the start for Thea band and also the first time they felt like authentic musicians with a management managing them.

Eventually, their musical journey progressed and after being under different managements in many years, their voices and their music got to be known by a bigger audience, not just in Davao City. Their folk fusion music is not something you would normally hear in the radio's airwaves.

"Our genre is just music to not be predictable. We are five in the band so the ideas come from these five beautiful minds. Ideas are dependent on moods and emotions," shared Thea who added that they listen to artists like Queen, Michael Jackson, and Gregory Alan Izokov among others for inspiration.

"At the end of the day, it's serving the song's direction that's your purpose. Sometimes, you don't need to be technical about it," she said.