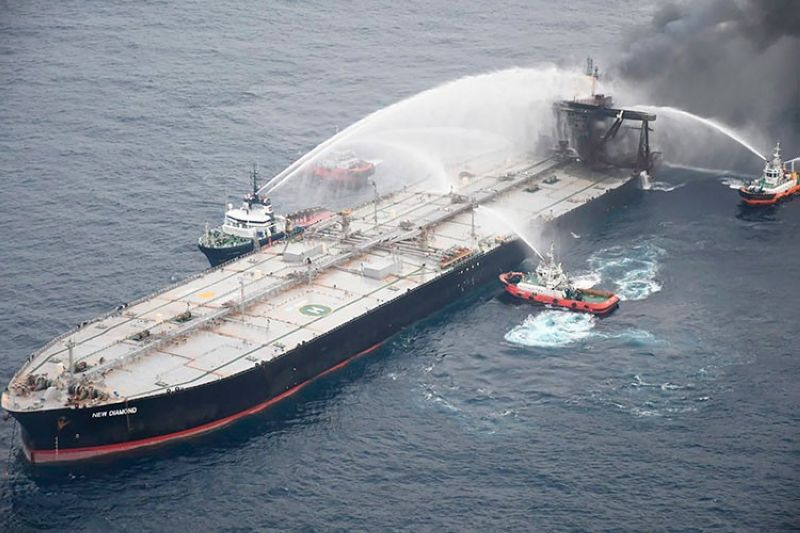 COLOMBO, Sri Lanka -- The owner of a large oil tanker that caught fire off Sri Lanka's coast has agreed to pay $1.8 million to the island nation for its help in extinguishing the blaze, an official said Thursday.

MT New Diamond, which was carrying nearly two million barrels of crude oil, was damaged by two fires over a week in early September.

Greece-based Porto Emporios Shipping Inc. is the registered owner of the 20-year-old vessel.

Nishara Jayaratne, the coordinating officer in the Attorney General’s Department, said the owner agreed to pay the claim in full. She said the attorney general is expected to present another claim of about half a million dollars for additional services rendered to the ship.

She said an interim report on environmental damage has also been submitted to the ship's owner, and that a separate claim for that will be presented after the final report is complete.

The owner’s agreement to pay came nearly a week after a Sri Lankan court ordered the ship’s Greek captain to appear in court on Sept. 28 after the attorney general directed police to name him a suspect in the fire.

Experts have been working to salvage the ship, which remains in Sri Lankan waters.

The tanker was transporting crude oil from the port of Mina Al Ahmadi in Kuwait to the Indian port of Paradip, where the state-owned Indian Oil Corp. has a refinery.

The initial fire killed one Filipino crew member and injured another, while 21 other crew members escaped uninjured. The 21 crew members, including the captain, are staying in a coronavirus isolation center for seafarers. (AP)