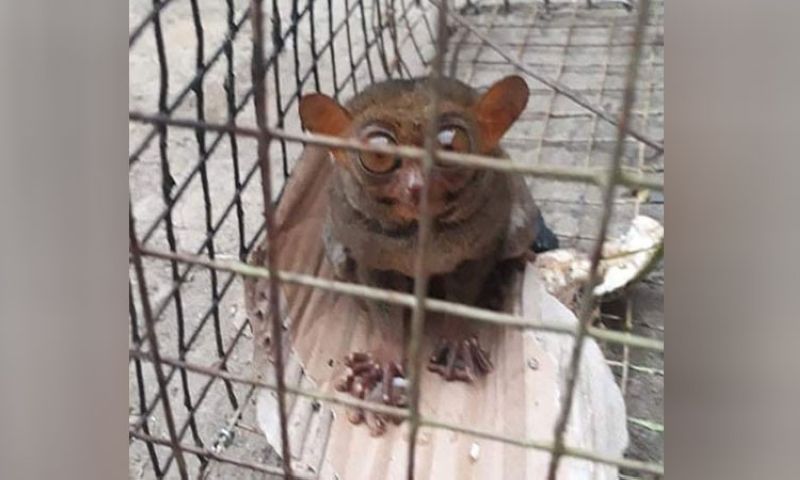 ZAMBOANGA. Personnel of the Department of Environment Natural Resources (DENR)-Zamboanga Peninsula rescue a Philippine Tarsier Tuesday, September 22, in Gunsili, Lapuyan, Zamboanga del Sur. The tarsier was released back to its natural habitat in the evening of September 22. (SunStar Zamboanga)

PERSONNEL of the Department of Environment and Natural Resources (DENR) in Zamboanga Peninsula have rescued a Philippine Tarsier in the province of Zamboanga del Sur, the agency said Friday, September 25.

It said the tarsier was rescued Tuesday, September 22, in Gunsili village, Lapuyan, Zamboanga del Sur after its picture was posted on social media by a netizen who inquired about what kind of animal it was.

The post was monitored by the Provincial Environment and Natural Resources Office (Penro) of the province.

The Penro-Zamboanga del Sur personnel immediately established contact and coordinated with the netizen, Ulama Mayo, and her daughter, Elmeda, for the proper turnover of the wildlife.

The DENR said a short information campaign was conducted to the community about the conservation efforts of the agency and the role of the citizenry and the salient features of the Wildlife Act.

The agency also reminded the public that possession of wildlife without a permit is prohibited and punishable under Republic Act 9147, otherwise known as "Wildlife Resources Conservation and Protection Act."

The tarsier was then released in the evening of Tuesday, September 22, in a forested area. The release was witnessed by Jamred Saga, the Municipal Environment and Natural Resources officer of Lapuyan, and Agustine Soon, the Municipal Agriculture officer of the same town.

The DENR-Zamboanga Peninsula described the Philippine tarsier as a shy and nocturnal animal.

The tarsier sleeps in dark hollows close to the ground, near tree trunks and shrubs during the day and becomes active only at night.

It has a keen sight and ability to maneuver around trees, and clings to trees and leaps from branch to branch.

The DENR said the tarsier, world's second smallest primate, can also be found in Bohol and other areas in the country. (SunStar Zamboanga)