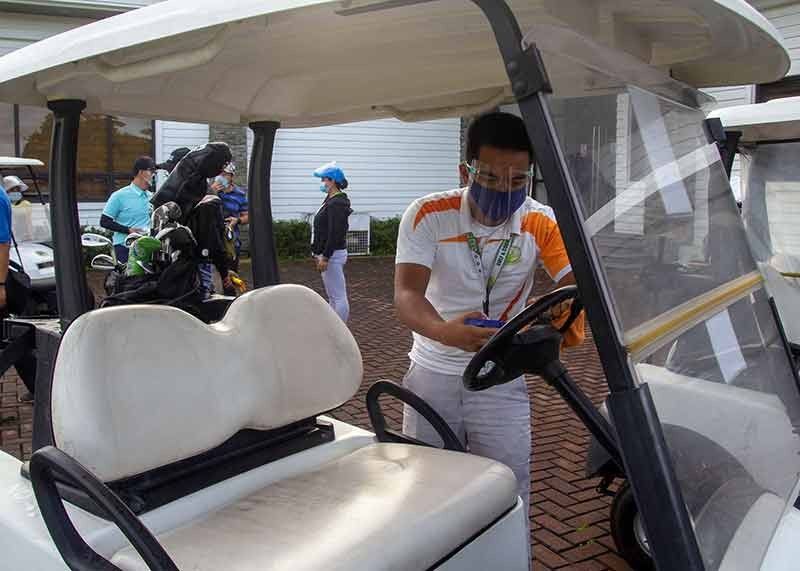 CLOSED FOR NOW. A caddy disinfects a cart in one of the golf courses in Baguio City. The scheduled 111th Baguio Charter fun golf was tentatively rescheduled next month after three golf courses in the Summer Capital closed, as some of their staff tested positive for coronavirus. (Jean Nicole Cortes)

ORGANIZERS of the 111th Baguio Charter fun golf tentatively moved the tournament to October 10 and 11 following the closure of all golf courses in the Summer Capital.

Pinewoods Golf and Country Club closed its courses after one of its guests, who played over the weekend, tested positive, while BCC announced one of the club's caddies made close contact to a person who recently tested positive for the virus in their barangay.

"We assure everyone that contact tracing and proper health and safety protocols including disinfection and sanitation are already being implemented, as it is always our priority to protect our valued members, guests and employees," the BCC announcement stated.

Dubbed "Boost your morale Baguio," the two-day fun golf tournament scheduled September 26-27 is supposedly to be played at the Pinewoods and BCC with a tournament fee of P3,500.

Baguio Olympics, organizers of the two-day fun golf assured all tickets that were sold can still be used on the proposed dates.