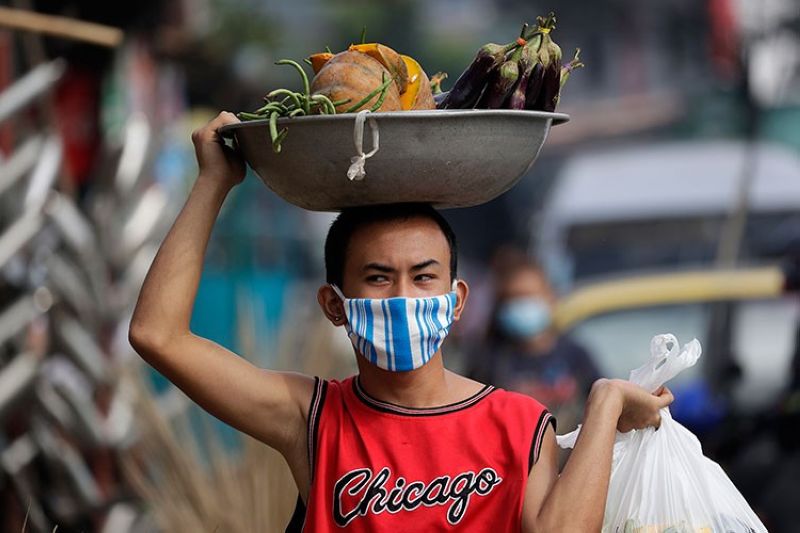 MANILA. A man wears a mask to curb the spread of the coronavirus as he peddles vegetables at the outskirts of Manila, Philippines on Friday, September 25, 2020. (AP)

THE Philippines now has more than 300,000 cases of the coronavirus disease 2019 (Covid-19), seven months after the first infection was recorded in the country.

Majority of the new cases came from the National Capital Region (NCR), with 1,115, said the DOH.

The DOH also reported 88 new deaths that brought the total number of mortalities to 5,284.

Majority of the new deaths were recorded in the NCR with 36.

The number of recoveries, meanwhile, has increased to 232,906, with 787 new recoveries.

The DOH reported the first case of local coronavirus transmission in the country in March.

In Cebu City, Barangay Apas has the most number of active Covid-19 cases at 63, as of Wednesday, Sept. 23.

City Councilor Joel Garganera, deputy chief implementer of the Emergency Operations Center, assured that all the positive individuals have been quarantined, including those living in Camp Lapu-Lapu, headquarters of the Armed Forces of the Philippines Central Command (Centcom).

Alfe Naingue, a member of the Apas Barangay Health Emergency Response Team, said most of the barangay’s cases were construction workers living in the Centcom barracks. However, Naingue did not say how many.

Garganera said 10 Covid-19 patients completed their 14-day quarantine on Sept. 26. Another 10 patients will be allowed to go home on Sunday, Sept. 27.

In an earlier interview, Environment Secretary Roy Cimatu, who had been ordered by President Rodrigo Duterte to oversee the Covid-19 situation in Cebu City, expressed his concern over the growing number of positive cases in Barangay Apas.

During his visit on Sept. 25, Cimatu met with Cebu City barangay captains for an update on their efforts against the rise of cases in their respective jurisdictions.

“We succeeded in bringing down the cases so this should be sustained but I’m very much worried with Apas. Most of those living there are from the military and I even scolded them and reminded them to take care of the barangay,” Cimatu told reporters.

While the rest of the barangays saw their Covid-19 cases go down, Apas’ numbers doubled, he said.

“While we are reducing some more, my target for Cebu City’s new normal is for it to have zero cases. That’s my aspiration for Cebu City because I’m very attached to the city, especially because of their reaction in our initial direction and coordination which we had support and cooperation,” he said.

Cimatu said Cebu City became a role model for cities like Iloilo and General Santos because of the significant drop of its Covid-19 cases, attributing the success to the grassroots level.

“If the barangay captain performs his job well, our positive cases will continue to go down. We have no time for relaxation. Unless there’s no vaccine yet, we have to do our part,” he said.

“So the bottom line of our effort is we are much, much better than the other areas and other cities. I’m very proud of Cebu City,” Cimatu added. (HDT, JTM, SunStar Philippines, JJL, JOB)