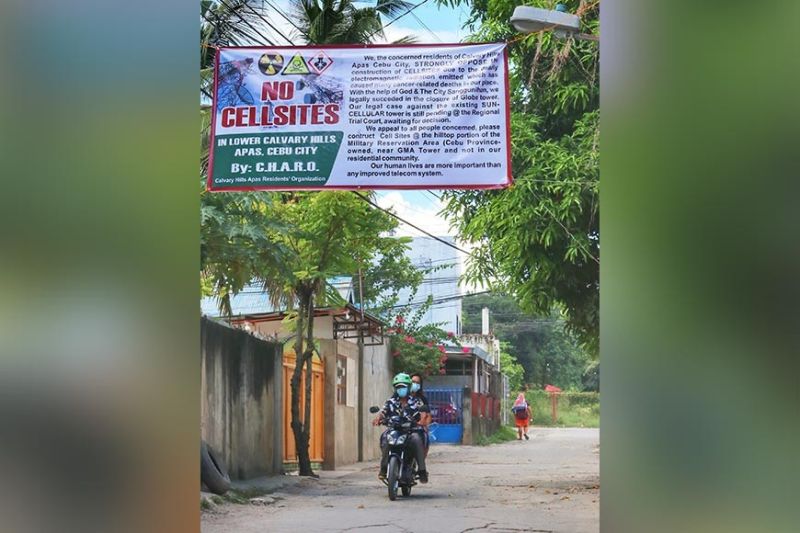 OPPOSITION. A streamer shows the opposition of members of the Calvary Hills, Apas Residents’ Organization to the proposal of Dito Telecommunity Corp. to install a cell site tower in Sitio Lower Cavalry Hill. In 2014, the area was home to two cell site towers, which residents blamed for 30 cancer cases in the sitio. (AMPER CAMPAÑA)

Gabuya said a public hearing was not held in the barangays where the two firms plan to install cell site towers.

However, Councilor Raymond Alvin Garcia said the approval was pursuant to the memorandum released by the Department of the Interior and Local Government (DILG) to streamline requirements for the putting up of cell site towers.

During the City Council’s regular session on Wednesday, Sept. 23, 2020, seven applications for a special use permit were included in the agenda: five from Dito and one each from Globe and Smart Communications Inc.

The applications, which were introduced in the form of a resolution, were sponsored by Councilors Garcia, Phillip Zafra, Eduardo Rama Jr., Prisca Niña Mabatid and Joel Garganera, all members to the City Zoning Board and allied to Mayor Edgardo Labella.

Smart’s application was deferred pending completion of requirements, while the six others were approved.

The council also referred the resolution to the City Legal Office for a legal opinion.

Gabuya said the lack of a barangay-level public hearing did not follow the process telcos used to undergo.

“Actually, many barangay captains have called about the lack of a public hearing regarding the building of cell sites. The only reason I told them is there is a DILG memorandum signed by Secretary (Eduardo) Año, stating that a public hearing is no longer needed,” Garcia said in a mix of Cebuano and English.

Gabuya said that should the council follow the new process, existing laws and ordinances the telcos have been following should be repealed and amended first.

“We have to repeal first our existing ordinance because that’s a law,” said Gabuya. “The memorandum of the DILG is not the law, (that’s) martial law na.”

He said there were two cell site towers in the area in 2014, which residents blamed for 30 cancer cases in the sitio. Nineteen people ended up dying, he said.

One of the cell sites was dismantled in 2016 after the council revoked its permit.

Meanwhile, Garcia assured that Dito completed its requirements, adding that the telcos did not violate any laws and regulations.

“The fact that their applications were approved by the zoning board means their requirements were complete,” he said in Cebuano.

He pointed out that barangay captains also issued barangay certifications allowing telcos to install cell site towers in their areas.

The DILG memorandum, Garca said, is to help telcos fast-track installation of cell sites for better internet services in the country.

During his State of the Nation Address last July, President Rodrigo Duterte gave telcos until December to shape up and improve their services.

The President also directed relevant agencies to ensure the improvement of digital infrastructure in the country.

For their part, Globe and PLDT, the holding company of Smart, complained about the time-consuming process in securing permits to build cell towers from local governments units (LGUs).

In August, the DILG released a joint memorandum circular (JMC), which reduced requirements.

The JMC also prescribed that LGUs and national government agencies shall only require documents stipulated in the memorandum and are prohibited from requiring anything else from applicant network providers. (JJL)