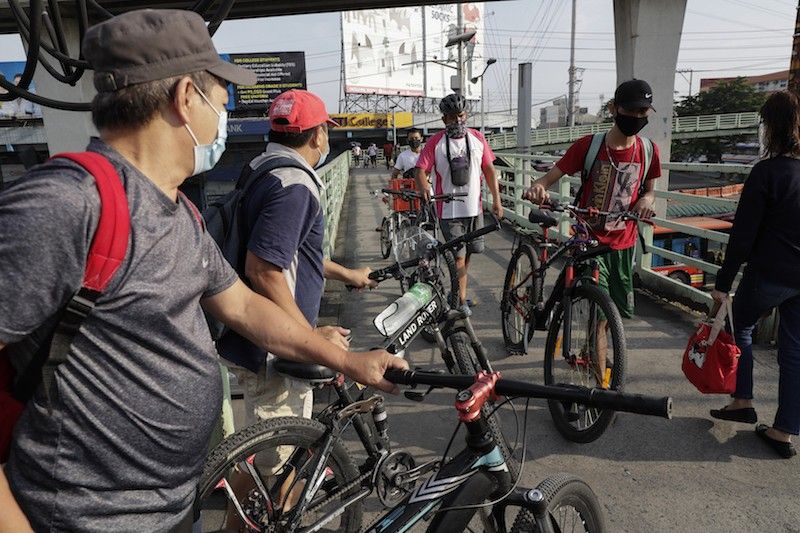 MANILA. Men wearing protective masks push their bicycles at an overpass in Quezon city, on Saturday Sept. 26, 2020. Public transportation remains limited and the government orders commuters to wear face shields and face masks to help curb the spread of the coronavirus. (AP)

THE Department of Health (DOH) recorded 21 deaths from coronavirus disease 2019 (Covid-19) in Western Visayas, the highest for Monday, September 28, 2020.

All 21 deaths occurred in September, based on the DOH case bulletin at 4 p.m. Monday.

The National Capital Region (NCR), which had traditionally recorded the highest numbers in terms of cases of infection, deaths and recoveries, posted no mortalities in September on Monday.

The eight deaths that DOH confirmed Monday as coming from the NCR occurred in August (four), July (three) and May (one).

Other regions with newly reported deaths were Calabarzon (four), Soccsksargen (two), Central Luzon (one) and Bangsamoro Autonomous Region in Muslim Mindanao (one).

The death toll from Covid-19 in the Philippines increased to 5,381 as of September 28.

In the same case bulletin, DOH reported 3,073 new cases of infection, bringing the total case count in the country to 307,288.

The agency also reported 163 patients who have recovered, bringing the total recoveries to 252,665.

Two cases that were previously tagged as recovered were reclassified to deaths after final validation while 11 duplicates were removed from the total case count.

Of the active cases, 3.4 percent were in critical condition and 1.5 percent were severe cases. Mild and asymptomatic cases constituted 86.4 percent and 8.7 percent.

About a third, or 1,158, were from the NCR. The provinces with the highest new infections were Cavity with 225, Laguna with 203, Rizal with 173 and Batangas with 169. (Marites Villamor-Ilano/SunStar Philippines)