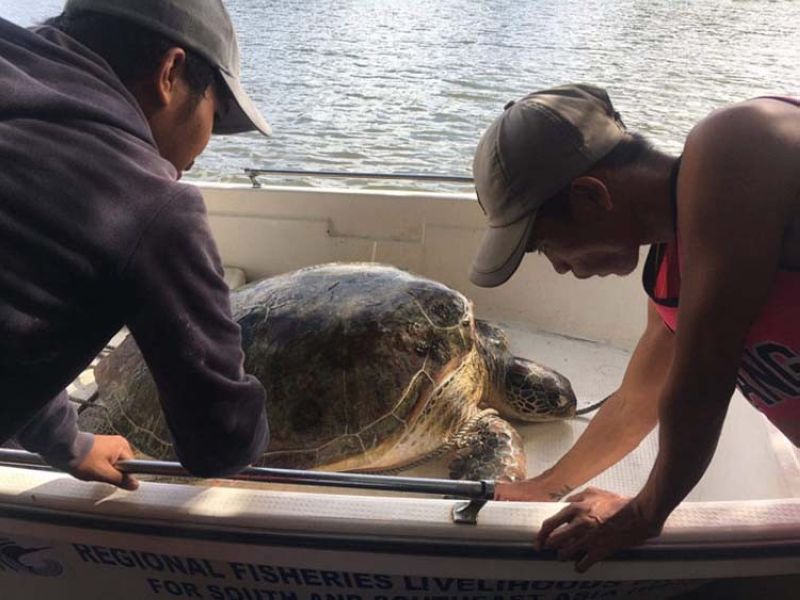 ZAMBOANGA. Personnel of the Community Environment and Natural Resources Office of Piñan, Zamboanga del Norte, with coordination from the Dapitan City Agriculture Office, rescue a Green Sea Turtle stranded on the shore of that city. A photo handout shows CENRO personnel examine the condition of the rescued turtle. (SunStar Zamboanga)

THE Community Environment and Natural Resources Office (Cenro) of Piñan, Zamboanga del Norte, has rescued a giant Green Sea Turtle that was stranded on the shore of Purok Sinaob in San Vicente village, Dapitan City.

The Department of Environment and Natural Resources (DENR) 9 said Monday, September 28, that the stranded turtle was spotted by the Dapitan City Agriculture Office personnel who reported their find to CENRO-Piñan.

The DENR-9 said that initial findings from the Coastal Resources Management Unit indicated that the sea turtle, which was rescued Thursday, September 24, had an injured flipper and was very weak.

It said that the Giant Green Sea Turtle is female and weighs 150 kilograms, has a carapace length of 42 inches, and a width of 37 inches.

The rescued turtle was placed under the care of the Dapitan City Agriculture Office for monitoring and rehabilitation.

The DENR-9 said that the rescued turtle will be sent back to its natural habitat once “it will be fit for release.” (SunStar Zamboanga)