'Mal'lambugok' returns to the wild 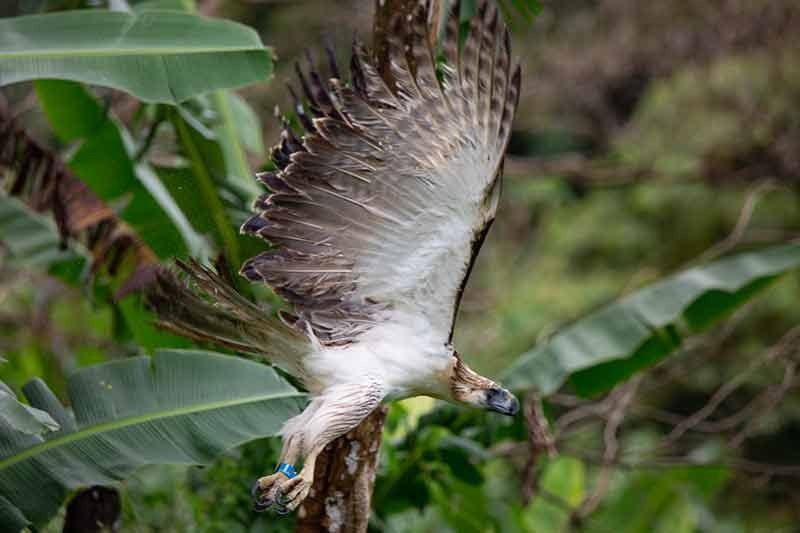 CARAGA, Davao Oriental -- A Philippine Eagle is finally able to fly back to its forest home after spending two months in rehabilitation following her rescue from a farmer's trap.

Mal'lambugok, a two-year-old female Philippine Eagle, majestically spreads her wings and launches herself into the air as the crowd cheers after she was released from a cage. Her release was held in time for the celebration of the World Environmental Health Day on September 26, 2020.

Davao Oriental Governor Nelson Dayanghirang together with partners from the Philippine Eagle Foundation (PEF), Local Government Unit of Caraga, and the Department of the Environment and Natural Resources (DENR) led the Philippine Eagle's release at Sitio Palo Siete in Barangay PM Sobrecarey here which is near the forest covering the Mount Mayo-Kampalili Mountain Range, one of the nine Key Biodiversity Areas along the Eastern Mindanao Biodiversity Corridor.

"Mal'lambugok was rescued more than a month ago. It was in a very weak condition so we had to move it back to the center for rehab. Now, having fully recovered and in excellent health condition, it's ready for release back into the wild," said Philippine Eagle Foundation Executive Director Dennis Salvador.

On July 31, 2020, the juvenile eagle was rescued in Sitio Tagbanahao in Barangay PM Sobrecarey after being caught in a trap set by a local farmer whose piglets have been hunted down for weeks.

Tito Pagsac, the farmer who set up the trap to prevent it from further preying on his livestock, immediately called the Philippine Eagle Foundation after discovering the eagle in his snare. "Although it was affecting my livelihood, I've already known beforehand that it is illegal to harm eagles, so I immediately contacted the PEF," said Pagsac, who is now one of the 25 registered forest guards protecting the forest and wildlife in his village.

Responding to the urgent call, a team from the PEF immediately took the bird to its center in Davao City where it was subjected to a series of tests and medical examinations. Based on the assessment, the bird was alert and has sustained no injuries. She was then placed under rehabilitation until her health was fully restored.

With her release, it is hoped that Mal'lambugok will be reintegrated back into the wild population. "Once she becomes sexually mature, she would find a mate, nest, and contribute new individuals that will help sustain the population into the future," says the PEF.

Mal'lambugok, whose name is the Mandaya term for Philippine Eagle, is only one of the few Philippine Eagles who are lucky enough to be rescued and released back into the wild.

While being considered a symbol of national pride as it is found nowhere else in the world except in the Philippines, the Philippine Eagle is also one of the world's most threatened raptors and is being listed by the International Union for Conservation (IUCN) as a "critically endangered" species, says the PEF.

Mal'lambugok, being a young "surplus" bird who will disperse across the landscape until she is sexually mature and breeds, is vulnerable to shooting, hunting, and trapping, the PEF adds.

Moreover, the degradation of the forest and human intrusion by competing with the eagles in terms of prey animals are other challenges that the species constantly face. Mr. Salvador of the PEF said that the eagle's predation of domestic animals is a big eye-opener indicating some degree of disturbance in their natural habitat. "Usually, eagles' prey on wild animals. But when it starts taking domestic animals, that says a lot on the condition of our forests. That's why it is important to have a sustained education campaign and perhaps there may be a need to support and provide conservation incentives so people don't take resources off the forest," he said.

Barangay PM Sobrecarey, which largely covers the ancestral domain of the Mandaya Indigenous Peoples, has been reported to have sightings of six other Philippine Eagles. The PEF says that the eagle's presence means that the forest and ecosystem here is still intact.

For the last few months, the foundation together with the local government units and concerned agencies are doing massive campaigns to highlight the protection and conservation of the Philippine Eagle and the forests. "We had a series of education campaigns in the area to let people know about the bird, its value, and the laws related to its protection and conservation. We also had some film showing, focus interviews with the people in the community," said Salvador.

Moreover, a group of 25 local forest guards deputized by the DENR as Wildlife Enforcement Officers (WEO) has been organized and trained to help protect the forest and the local wildlife within the ancestral domain. As a means of support, the provincial government initially provided each of them a pair of rubber boots, a new set of uniforms, and a provision of one sack of rice.

However, the PEF and the provincial local government are looking at more sustainable and long-term means of conservation. Among them is providing incentives for those who protect the forest and placing heavy penalties on those who commit illegal acts like poaching and wildlife vandalism, among others.

Governor Nelson Dayanghirang said, "The government must intervene and must take its active role to protect not only the forests but also the people who live through the forest." He cited the provincial government's plan to be launched early next year an alternative but a lucrative livelihood program for farmers through the planting of agarwood trees in the ancestral lands.

He also mentioned Barangay PM Sobrecarey's huge potential for eco-tourism because of its cold atmosphere and the sightings of the Philippine Eagle which could attract many tourists. This, in turn, could provide alternative livelihood for the locals.

For the villagers, Mal'lambugok's release was a historic moment in their sleepy, hinterland village. In awe of its majestic beauty and appreciating its value to the forest, residents here have signified their cooperation and support to the local government to help protect the Philippine Eagles.

For this reason, the provincial government and the local government units aim to strengthen programs to safeguard forests while empowering the communities which are at the heart of the conservation and management efforts. (Karen Lou Deloso)