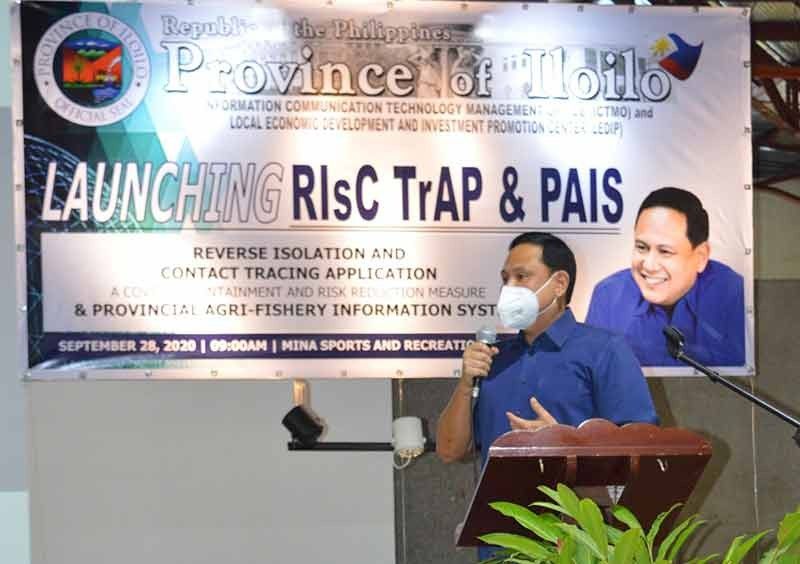 ILOILO. Governor Arthur Defensor Jr. delivers his message during the launching of RIsC TrAp at the Mina Sports and Cultural Center in Mina, Iloilo. (Capitol PIO)

THE Iloilo Provincial Government has launched a web-based reverse contract tracing app that would fast-track the reporting of residents with probable exposure to coronavirus disease (Covid-19) patients.

The event was also attended by the Provincial Board members, 43 mayors, and Capitol department heads.

RIsC TrAp is a web-based system that intends to upgrade the contact tracing capability of the government with the help of the Barangay Health Emergency Response Teams (BHERTs) and the local government units.

Residents will have to fill out a travel declaration card and the data will be encoded in the system.

The database will contain a record of residents working and conducting business in establishments, industries and livelihood sectors, as well as the record of persons exiting the barangay and traveling to destination where there are large number of people such as fishing ports, malls, banks, business establishments, government offices and facilities or a public gathering.

In his speech, Defensor said the application will help towns monitor the movement of people from and to the barangay.

"This is a web application designed for the barangay to establish a database of residents in order to keep track of their travel history," he said.

The system was conceptualized by Defensor and created by the Information and Communication Technology Management Office (ICTMO).

"In the event of virus transmission, the barangay level can easily trace and identify possible contacts to Covid-19 positive with the use of RIsC TrAp," the governor said.

Barangays will be provided with computers for them to have access on the web-based app.

ICTMO chief Salvacion Sibonga said the system will soon have a mobile component wherein residents can install the application on their smartphones and encode their data in lieu of the travel declaration card.

To sustain the project, the province will also provide technical assistance and training to designated end-users.

In his Executive Order 183, Defensor emphasized the adoption of reverse isolation or the isolation of persons more vulnerable to Covid-19 such as those with compromised immune systems, the senior citizens and pregnant women.

PAIS-Farms is a web-based system that aims to get realistic status of the degree of production of commodities in the province of Iloilo.

It works by gathering agriculture production data from the barangay level which will be consolidated up to the provincial level.

The system could help farmers and fisherfolk market their products for target consumers via comprehensive database and website linkages. (PR)