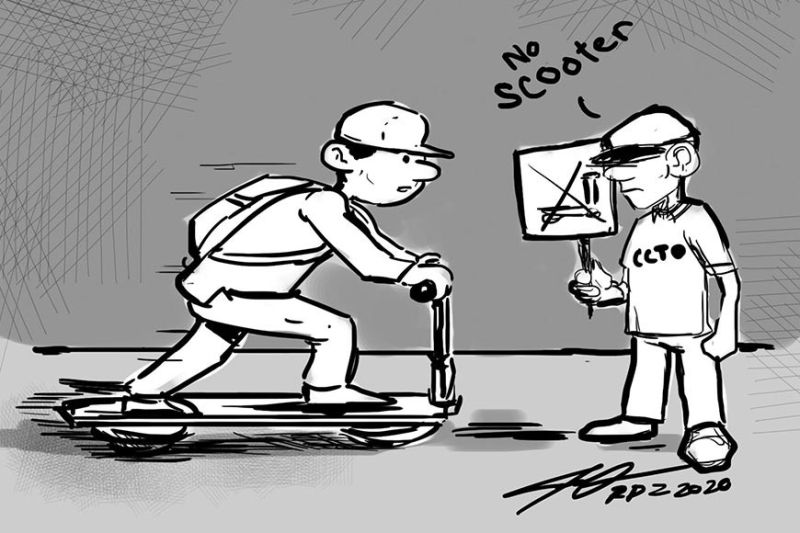 THE growing community of e-scooter users in Cebu City finds its staunch advocate in the name of Councilor Joel Garganera, who says he shares the same view with colleagues Councilor Junjun Osmeña and Dondon Hontiveros.

The months of community quarantine left a good number of frontliners turning to the e-scooter as an alternative mode of transportation. Way cheaper than a motorcycle or a bicycle, the currency of this new mode is helped by the health crisis itself. We haven’t even mentioned its other merits such as how it practically runs fleet and light as far as carbon footprints go.

In a privilege speech Wednesday, Sept. 30, 2020, at the Council, Garganera explained why the City Government must opt for regulation rather than outright prohibition.

The Cebu City Traffic Office (CCTO) last week brought up the matter of Ordinance 801, which provided that “no person upon roller skates, or riding in or by means of any coasters, toy vehicle or similar devise, shall go upon any roadway except while crossing the street.”

Garganera disclosed that the ordinance was enacted in the 1970s yet, and it must already have been in essence superseded by a 2014 ordinance that designated a bicycle lane in Cebu City. That the same ordinance classified “electric bicycles” under the generic “bikes or bicycles” would imply that the City was beginning to consider evolving modes of transportation. The aged ordinance that the CCTO cited apparently have not conceived of a time when the lowly toy scooter would evolve into its motorized form and be as reliable a mode of transport as it is now.

Well, the “new normal” apparently included the e-scooter in its fold, and perhaps it must now go beyond than being token science and technology prototype projects handed down to community cops and fun rides in amusement parks.

Necessity is the mother of invention, yes, and it’s the pandemic from which the e-scooter tumbled forth with its obvious practicality and necessity.

“Why are these individuals, especially frontliners and essential workers, resorting to the use of other means of transportation such as e-scooters? After having been under community quarantine for months, it is a fact that there was no public transportation available. We may have provided buses, but not everyone could catch up with the schedule. With this, e-scooters have provided our frontliners and essential workers enough room to manage their schedule,” Garganera said in his speech.

Wouldn’t it be better that the CCTO or the local government units in Metro Cebu for that matter spend its energies on crafting policies for e-scooters while improving the state of the cities’ bicycle lanes? Instead of forcing a law that had been frozen in time?