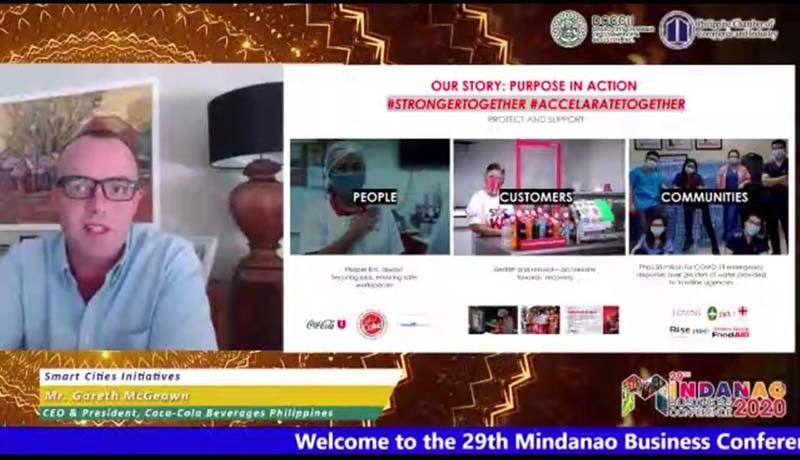 COCA-COLA Beverages Philippines Inc. (CCBPI)’s investment outlook is not dampened by the impact of the Covid-19 pandemic. Amid a nationwide economic slowdown, the beverage company remains bullish and is on track with expansion projects in Mindanao, whose further development the company is intent on supporting.

At the 29th Mindanao Business Conference (MinBizCon), held virtually recently, chief executive officer and president Gareth McGeown shared that CCBPI has invested an additional $22 million (P1.065 billion) for Q4 of 2020 alone—bringing up the total 2020 investment in the country to over $95M (approximately P4.7B). A significant amount of this has been allocated to increase operational capacity in Mindanao by 30 percent. With much of the spending allotted for infrastructure, CCBPI will have three new manufacturing lines in the region, providing new job opportunities for more Mindanaoans.

“Mindanao has been a growth engine for us for the last few years. We have seen that our growth rates in the region have continued to expand double-digit over the last two to three years, and we have a firm belief that such growth will continue,” said McGeown.

McGeown also noted that consumers in Mindanao are more open to new products compared to those in Metro Manila, another reason the territory plays a critical role as a launchpad for new portfolio brands and variants. The uniqueness of consumption behavior in Mindanao makes it critical to CCBPI’s growth strategy.

“More than the consumers’ taste and preferences, the region’s growth rate gives us a reason to believe that great days are ahead for Mindanao,” added McGeown.

Over 500 delegates comprising top businessmen, key industry players, government executives and members of the diplomatic corps joined the two-day MinBizCon, which became an avenue to discuss economic concerns and opportunities in the region. The annual event was hosted by the Davao City Chamber of Commerce and convened by the Philippine Chamber of Commerce.

Aside from the additional lines being built in Mindanao that will pave the way for more jobs, CCBPI on Sept. 4 launched “Balik Pinas,” a program that provides business opportunities for OFWs returning to the country. This is aligned with CCBPI’s thrust to help more individuals and communities get back on their feet and thrive in the new normal.

“No business can run independently of the communities they operate in. One of the reasons Coca-Cola has been successful for so long is that we are an integral part of all communities we operate in,” the CEO noted.

According to McGeown, CCBPI’s “Purpose in Action” commitment is to protect its employees, jobs, as well as support its customers and communities during the pandemic. The company also provided its employees with comprehensive medical coverage and ensured job security so they can continue supporting their families.

McGeown further assured that CCBPI remains staunch in fulfilling its commitments to the country and sustainability. PETValue—the pioneering P1 billion, state-of-the-art, food-grade recycling facility—will soon rise in General Trias, Cavite and is set to be operational by Q4 of 2021. This is CCBPI’s joint venture with Indorama Ventures, a global leader in recycling and green technologies.

With 108 years of bringing refreshing moments to Filipinos and as the first home of Coca-Cola in Asia, CCBPI continues to grow its market through bullish investments and initiatives to support its communities in the Philippines. (SPONSORED CONTENT)