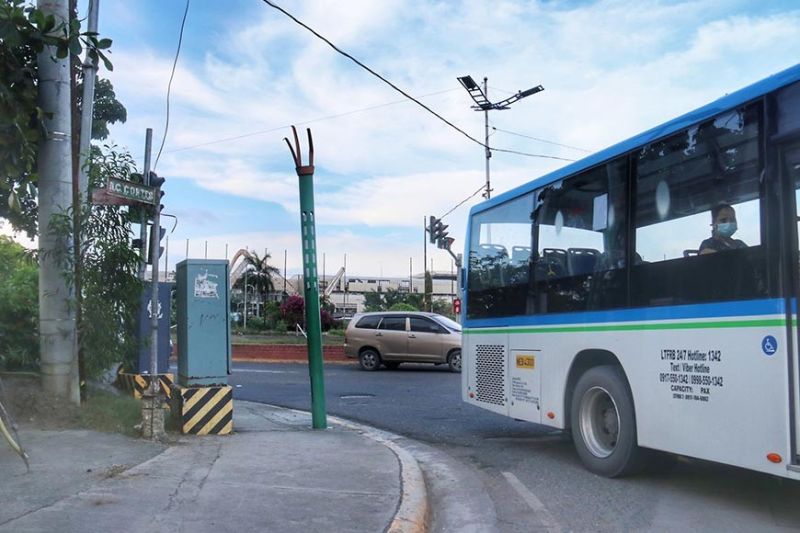 LAMPPOST. This now non-functional lamppost is one of the 300-plus “decorative lampposts” installed in Mandaue and Lapu-Lapu cities during the Asean summit held in Cebu in January 2007. The ones in Lapu-Lapu City had been found to have cost the government 10 times their actual cost. The Sandigayan released on Sept.29, 2020 its decision convicting three former officials of the Department of Public Works and Highways and a private contractor, of graft for the irregular and overpriced purchase of the decorative lampposts for Lapu-Lapu City. (Photo by Amper Campaña)

THE Sandiganbayan ordered the imprisonment of three officials of the Department of Public Works and Highways (DPWH) 7 and a private contractor for violating Republic Act (RA) 3019, or the Anti-Graft and Corrupt Practices Act.

In a decision posted on its website on Tuesday, Sept. 29, 2020, the anti-graft court found Robert Lala, then DPWH 7 director; Pureza Fernandez, then officer-in-charge of the maintenance division; Agustinito Hermoso, then legal officer and bids and awards committee member; and Gerardo Surla, chairman of the board of Gampik Construction and Development Inc., guilty.

Lala, Fernandez, Hermoso and Surla were sentenced to a minimum of six years and one month up to eight years in prison with perpetual disqualification from public office for the three government officials.

The case stemmed from a complaint filed before the Office of the Ombudsman-Visayas over the procurement of decorative lampposts that were installed for the 12th Association of Southeast Asian Nations (Asean) Summit that was held in Cebu in 2007.

The transaction between the agency and Gampik was allegedly overpriced and highly irregular.

The decorative lampposts were installed in the cities of Mandaue and Lapu-Lapu.

The Ombudsman-Visayas filed two criminal charges against 11 DPWH 7 officials and Surla over the awarding of two contracts.

The Sandiganbayan had acquitted all 11 from the charges related to the first contract for the “prosecution’s failure to prove their guilt beyond reasonable doubt.”

The first contract was for the installation of 300 lampposts in Mandaue City for P24.9 million. The second contract involved P35.6 million for the supply and installation of streetlights in the cities of Mandaue and Lapu-Lapu.

Gampik was paid P21.2 million representing 85 percent of work accomplished in Mandaue City, but no payment was released for the second contract amounting to P35.6 million.

Allegations included overpricing and undue preference in the awarding of the second contract.

According to the evidence presented by the prosecution, Lala and Fernandez, upon the advice of Hermoso, illegally and prematurely entered into a Memorandum of Understanding (MOU) with Gampik on Nov. 22, 2006, allowing Gampik to proceed with the P35.6-million contract even before the actual bidding on Nov. 28, 2006.

Hermoso, in his affidavit, said he came up with the idea of the MOU so Gampik would be convinced to immediately start the project given the time constraint.

Hermoso said they were given until Oct. 30, 2006, to complete the project in time for the 12th Asean Summit in January 2007. It was only in July 2006 that they were ordered to proceed with the project.

The Sandiganbayan said Lala, Fernandez and Hermoso violated the principle of competitiveness of bidding as well as Letter of Instructions 767, which prohibits heads of agencies from entering into a contract unless funds are available for the purpose and from allowing contractors to undertake work “at their own risk.”

In their defense, Lala, Fernandez and Hermoso said the date in the MOU was a mere typographical error, but the court said that this was just a “feeble excuse” on their part. (MVG)