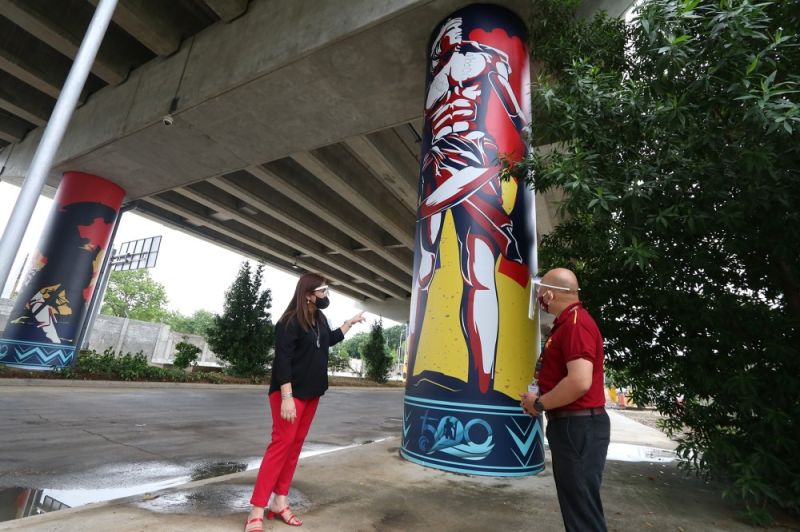 LAPU LAPU DECAL: Lapu-Lapu City First Lady Cindi King-Chan and Giovanni Ruiz, brand manager of GMR Megawide Cebu Airport Corp., explain the concept behind the four decals of the warrior Lapu Lapu as being part of the commemoration of the 500 years of the Battle of Mactan on April 27, 1521. (Alan Tangcawan) 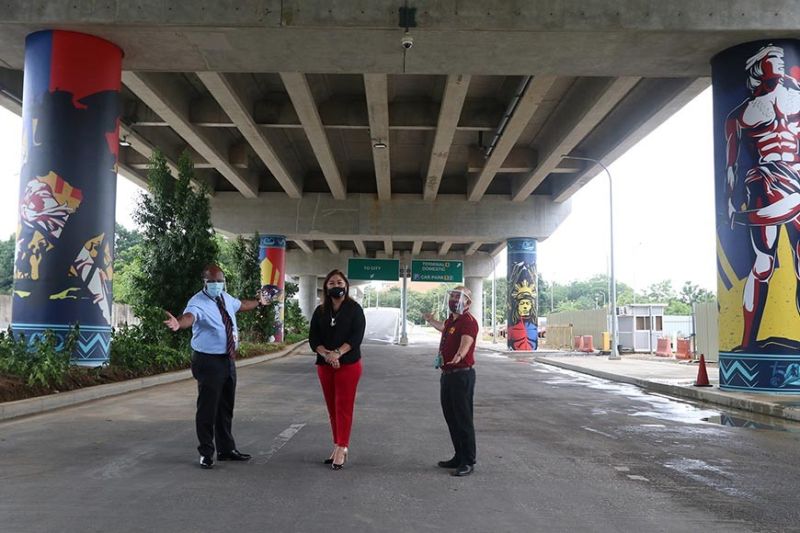 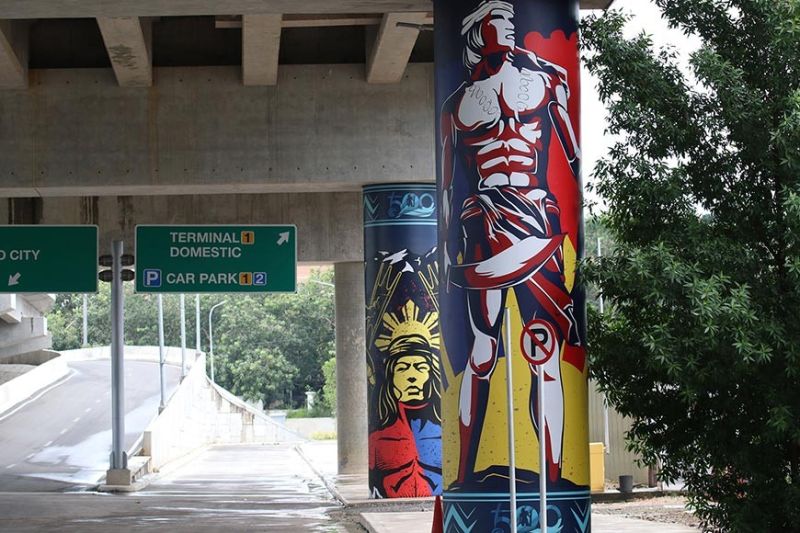 IMAGES OF A HERO. In these decals, Lapu Lapu is larger than life -- brawny, tall, heroic.(Alan Tangcawan) 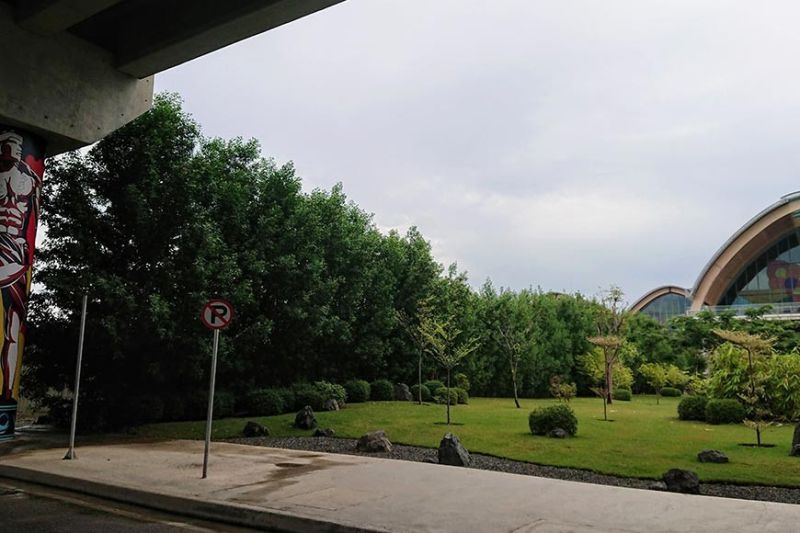 LAPU LAPU IN ZEN. The decals are only a few feet from the Zen garden, located at the arrival area of Terminal 2. (Michelle P. So)

LAPU Lapu, the great Bisdak warrior, makes his presence felt at the arrival area of the Mactan-Cebu International Airport (MCIA).

One cannot miss the images of him plastered on four pillars at the exit road of Terminal 2.

The large Lapu Lapu decals on the pillars are paying homage to the famed warrior whose battle with Ferdinand Magellan on April 27, 1521 will have its 500th commemorative year in 2021.

“What better way to commemorate the Battle of Mactan than to graphically depict the importance of the warrior Lapu Lapu and the defeat of Magellan,” Andrew Harrison, chief executive advisor at the GMR Megawide Cebu Airport Corp. (GMAC), says. “This lays the very foundation of the freedom that Cebuanos enjoy today.”

Lapu Lapu is depicted differently on each pillar. Each decal uses the same colors of red, blue and yellow “to depict our national identity,” GMAC brand manager Giovanni Ruiz says.

The color theme is also consistent with that used in different parts of the MCIA, “so there is a connection of the airport and the relevance of this battle,” Harrison adds.

Ruiz points out: “The graphics style is young and fresh. It lends some comic art because our team who conceptualized this is young.”

He credits the creative team of Ian Intong, Erica Villamor and Michelle Baliber for the “millennial” look of Lapu Lapu.

The decal wraps the pillar, which has a height of seven meters and a circumference of six meters. A Sintra board is fastened underneath the decal to smoothen the look.

Harrison says the use of the pillar rather than a flat wall conveys the message of Magellan’s circumnavigation in his quest to discover the world, leading him to Philippine shores.

Harrison, who has been the leading figure in upgrading the MCIA, says the Lapu Lapu art concept took shape with the input of Cindi King-Chan, the first lady of Lapu-Lapu City and the chairperson of the City’s Tourism Cultural and Historical Affairs Commission, and the public.

“We chose this location (for the decals) because this is where all vehicles exit,” Harrison says. “That means, you’re free of thinking about immigration, customs, hotel reps (as you head out of the airport). This provokes you to ask (as you see the decal): What is this?”

The sight of the Lapu Lapu decals can interest the uninitiated to find out more about the Bisdak warrior. A huge statue of Lapu Lapu can be found at the Mactan Shrine in Punta Engaño.

Harrison admires that the personnel of the resorts in Lapu-Lapu City are “historians.” They tell their guests about the famed Battle of Mactan, stirring their interest to explore not only Lapu-Lapu City but mainland Cebu as well.

King-Chan has planned to train community tour guides so that they can be the direct source of historical facts about their locality.

She says she is collaborating with the Department of Education (DepEd) for a modular course on the history of Lapu-Lapu.

Through this, she says, “the Oponganons will have a sense of history and they will instill pride of their city in themselves.”

The decals weave the story of Lapu Lapu, the warrior.

Ruiz says that the team behind the decal project used Antonio Pigafetta’s account of who Lapu Lapu was.

One decal shows Lapu Lapu in an aristocratic stance, another in battle and another being crowned with a sun symbol. At the bottom of each image is the icon of the 500 years commemoration.

“He was an aristocrat. He had the divine right to rule but he did not necessarily lead the battle. He only gave the orders and his warriors executed them. He perhaps surveyed the scene after the battle or delivered the blow,” Ruiz says.

“We see Lapu Lapu as larger than life and towering with strength,” he says.

Harrison sees the Lapu Lapu history as a lesson.

“We learn a lot from history. Lapu Lapu didn’t lead at the front and 500 years later, it’s something that business can learn from today: that leadership need not take place from the front. Leaders can lead from behind. If you put your people forward and you are there to support them, they will deliver the mission,” Harrison says.