No Davao City barangay under 'very high risk' since September 11 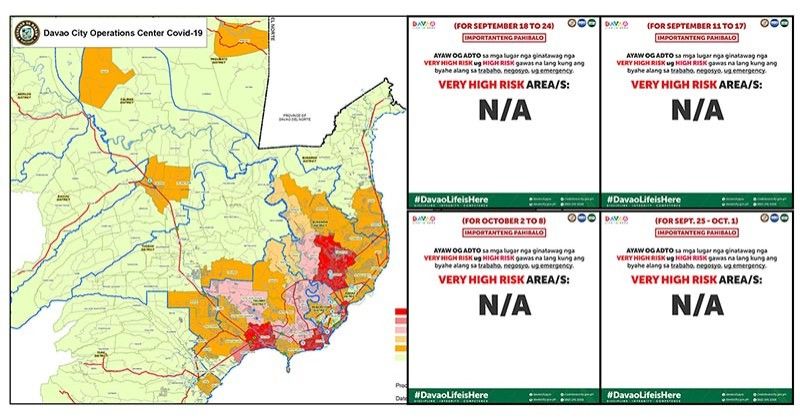 THE City Government of Davao has not declared any "very high risk" areas for the past four weeks despite recording a surge of Covid-19 cases.

The "very high risk" classification has been zero since the publication of the Covid-19 Risk Assessment Map for September 11 to 17 until the recent assessment for October 2 to 8.

The last barangay to be classified under "very high risk" was Leon Garcia in Agdao District for the week of September 4 to 11.

For October 2 to 8, seven barangays are under high-risk areas, the current highest risk classification in the map. These are Bucana, Buhangin Proper, Gov. Paciano Bangoy, Matina Crossing, and Sasa. While in close proximity to high-risk barangays, which are also considered high risk, are barangays 21-C and 25-C.

The City Government publishes the identified barangays weekly to avoid unnecessary travel to areas identified to be very high risk, high risk and moderate risk based on the risk assessment made, including public markets (palengke), supermarkets and all other establishments.

The classification of barangays has started since May 16, following the city’s shift to general community quarantine, resulting in the lifting of the district clustering that strictly limits travel from one cluster to another.

According to the Davao City Operations Center for Covid-19, the factors used for the risk assessment are the following: the population density; total confirmed cases; attack rate per population; and the behavioral index, comprising the number of the enhanced community quarantine violations and a number of 911 calls responded that can influence going out or crowding of persons.

Despite having no very high risk areas for September, there was a surge of Covid-19 cases in Davao City for the month, based on the data from the Department of Health-Davao Region (DOH).

September also recorded the most number of new deaths related to the Covid-19 with 23. Total deaths linked to the disease are now at 78.

The total Covid-19 cases in Davao Region had remained below the projections of the University of the Philippines-Mindanao's Interdisciplinary Applied Modeling laboratory (IAM lab).

In August, the IAM lab projected that the total Covid-19 cases in Davao City may hit 2,500.

The surge of the cases, according to DOH-Davao, were already expected following the resumption of economic activities since the city was shifted to modified general community quarantine.

The City Government has advised the public to continuously observe the minimum health protocol such as the two-meter physical distancing, wearing of face mask and face shield in public places, and frequent handwashing to curb the Covid-19 transmission.