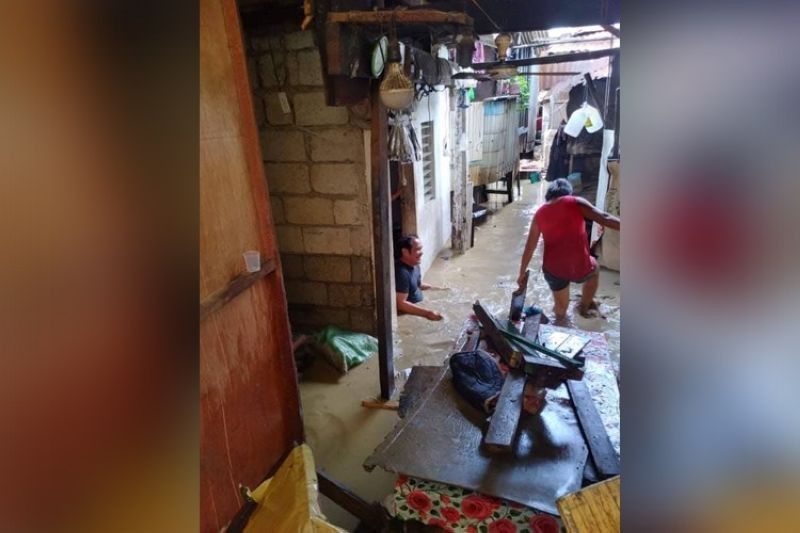 SCHOOL officials in Cebu had to contend with problems on the first day of distance learning on Monday, Oct. 5, 2020—modules damaged by flood, educators struggling to adjust in a virtual teaching milieu and parents claiming learning materials for their unenrolled children.

In Mandaue City, around 800 students of Paknaan Elementary School and High School had to request for new modules on Monday after heavy flooding, brought about by the rainy weekend, inundated their homes.

Some of the modules, along with other things, were carried away by the flood. Some students managed to find their learning materials but these were already torn and covered with mud.

Flooding, even before the Covid-19 pandemic, has been a perennial problem in Paknaan, which has sitios that sit near the Mactan Channel and Butuanon River, which often swells during heavy downpour.

The Paknaan students will possibly receive their learning modules on Wednesday, Oct. 7.

However, if it will take more time to print the materials, Bongo said the DepEd Mandaue City will encourage students who own smartphones and have internet access to adopt the digitized modular distance learning—teachers will upload the soft copy of the modules and let the students download the materials.

The problem encountered by students and teachers in Paknaan on the first day of school year 2020-2021 saddened DepEd 7 Director Salustiano Jimenez.

Most parts of Cebu have been experiencing heavy rainfall in the past days.

Jimenez has not received reports similar to the situation in Paknaan and the start of distance learning went smoothly in several schools.

If rain continues in the coming days, Jimenez admitted there will be a problem in distributing new modules in Paknaan and in other parts of Cebu.

At the Mandaue City Science High School (MCSHS), some teachers struggled in familiarizing themselves with the virtual class arrangement.

MCSHS has a total of 469 students for this school year.

Farah Judaya, officer in charge of MCSHS, said the teachers will work together to help those who have problems with their computers during their online class.

To monitor the virtual classes, Judaya said that the principal and some supervisors from the division office will randomly enter their virtual room.

The students can record the online discussion to help them in their studies.

On Oct. 5, Jimenez inspected schools, and one of the schools he visited was Mabolo Elementary School. He saw parents who tried to get learning modules for their children who were not yet enrolled.

Jimenez approached the disgruntled parents and asked for their cooperation, telling them that printed modules had been prepared for enrolled students.

He told them the DepEd still welcomes late enrollees until the first week of November.

According to the DepEd central office, around three million students have yet to enroll as of Oct. 5.

More than 24 million learners, or 89 percent of last school year’s enrollment, have enrolled in K to 12 basic education this school year despite reservations over DepEd’s distance learning program.

Of this number, 22.5 million are enrolled in public schools, Mateo said.

DepEd Secretary Leonor Briones said the opening of this school year is a sort of victory against the coronavirus disease 2019 pandemic.

“Today, we celebrate a great victory. We declare our victory over Covid-19, the destroyer of our lives. We will not allow Covid-19 to destroy our children’s education and their future,” Briones said during the department’s school opening program.

The DepEd is implementing distance learning through modular, online and TV/radio-based instruction.

President Rodrigo Duterte, in his message, said the shift to distance learning is the mark of the new era for education.

“The school opening of this year is a momentous occasion because it is pushing through despite (the) global health crisis due to Covid-19,” he said.

“This time also ushers in a new era in our basic education program as we now venture into distance and online learning,” Duterte added.

Lt. Gen. Guillermo Eleazar, JTF commander, said based on the experiences of their policemen on the ground, quarantine violators would usually scamper and return to their houses when they see police vehicles approaching their areas.

He said it was proof that they are aware of their quarantine violations, such as failure to wear face masks and holding mass gatherings.

On orders of Department of the Interior and Local Government Secretary Eduardo Año, Eleazar said he also instructed police commanders to coordinate with the local government units, particularly at the barangay level, for the implementation of local ordinances that prohibit drinking in public places and regulate the use of videoke.

“Our local police personnel and barangay officials should work together to extend all the necessary assistance to make sure that our online learners would be able to concentrate on their studies,” Eleazar said. (KFD, TPM / SunStar Philippines)