Chico hero's memorial up for demolition 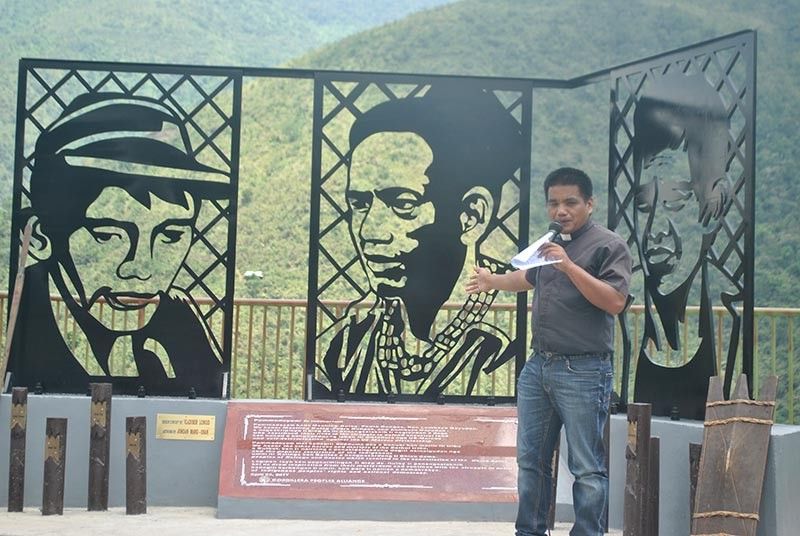 MARKERS. Pedro Dungoc Jr., son of the fallen Cordillera hero, during the inauguration of the hero's memorial in Bugnay, Kalinga in 2017. (Contributed photo)

INDIGENOUS People's month celebrations are marked with plans to demolish a hero's memorial in Bugnay, Kalinga.

The Department of Public Works and Highways (DPWH) confirmed that the monuments of Chico dam hero's Macliing Dulag, Pedro Dungoc and Lumbaya Gayudan is encroaching the road right of way of the national road in Bugnay, Tinglayan and is up for demolition.

The Cordillera People's Alliance (CPA) issued an alert on plans by the Provincial Advisory Council of the Kalinga Provincial Police Office, which requested the Provincial Board Committee on Oversight to "enact a resolution to remove the monuments."

The CPA appealed, saying: "We call on the Sangguniang Panlalawigan of Kalinga not to issue a resolution that would demolish the heroes' monument in Bugnay. We call on the advocates of the Anti-Chico Dams Struggle to speak out against historical revisionism, disinformation and degrading the legacy of the anti-Chico dams heroes."

The monuments were built by the CPA after 17 years of planning and coordination with the community and organizations after the request of the late Francis Macliing (son of Macliing Dulag) back in 2000.

In 2017, the CPA commissioned architect Vlad Longid and solar artist Jordan Mang-osan to conceptualize and design and work with over 50 individuals from the community to set up the symbolic markers.

Mang-osan, in a statement, said the planned demolition would mean a total waste of art and culture, as well as the significance of the markers was to pay tribute to the Chico River struggle.

The CPA said representatives of the families of Macliing, Dungoc and Lumbaya, and the umili from Bugnay conducted community consultations involving the local government units for the project.

The clan of Macliing Dulag offered the parcel of land where the monument was constructed.

No problems on road right of way were raised during that time and the project was inaugurated as part of the people's Cordillera Day celebration on April 23, 2017.

"It has been more than three years since the monument was put up. If there was a problem with the site of the monument, why didn't the Kalinga police or Ukdeo stop us during the construction? If it is to be demolished for encroaching on the national road, then it will make the numerous residential houses that are lined up along the Bontoc-Kalinga road from Tinglayan to Tabuk in danger of demolition as well. It is the police that wants the monument demolished and not the umili," said the CPA.

It also said that the police request to remove the monument and a resolution of the "Butbut tribe" condemning CPA on the use of the names of local heroes came after General R'win Pagkalinawan, director of the Police Regional Office-Cordillera, personally visited and talked to people in Bugnay.

"There is no reason for the police or the government to demolish the heroes' monument other than to distort, revise and eradicate the historical truths of oppression and resistance behind the monument," CPA said.

Juliet Aban of the DPWH regional information office confirmed that the Upper Kalinga District Engineering Office (Ukdeo) decision, issuing the construction of the monument, is illegal as it is situated 4.10 meters from the centerline of the road and the monument encroached on the national road.

She said notices were given on the move.

The DPWH said coordination on which agency will conduct the demolition is still ongoing.

SunStar Baguio is awaiting the Police Regional Office's statement on the matter.