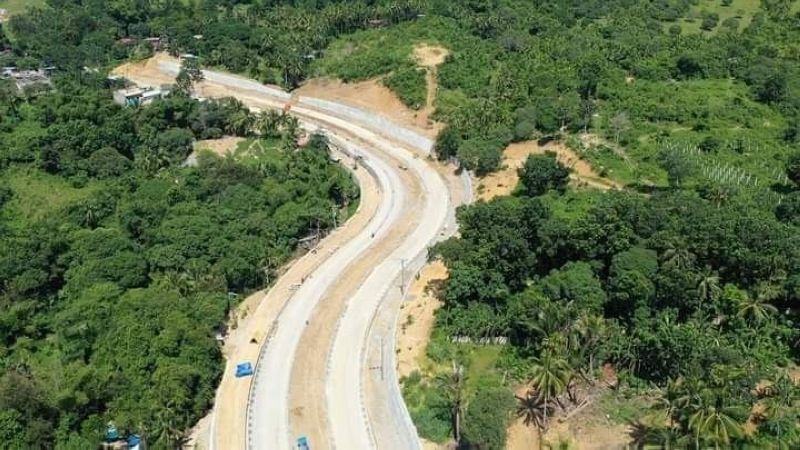 WORK IN PROGRESS. Officials of the Department of Public Works and Highways Central Visayas say the construction of the third segment of the Metro Cebu Expressway, which connects the City of Naga in the south and Danao City in the north, is still ongoing despite work suspensions due to the Covid-19 pandemic. (CONTRIBUTED, DPWH 7)

EVEN with the Covid-19 pandemic, the construction of the third segment of the Metro Cebu Expressway (MCE), a 73.75-kilometer highway that will connect Naga City in the south to Danao City in the north, is ongoing.

Edgar Tabacon, director of the Department of Public Works and Highways Central Visayas (DPWH 7), said that except for the 2018 MCE project component, which was suspended effective July 1, 2020 due to issues on road right of way (RROW) acquisition, works for the 2019 and 2020 project components of the MCE’s third segment are still ongoing.

In a separate interview, Joy Paylado, MCE project engineer, said this progress is a bit ahead of the planned and revised project schedule as of now.

Majority of the developments, Tabacon said, are found in the village of Pangdan in Naga City. He said major activities involve earth works, slope protection structures, construction of bike lanes and drainage and concreting of pavements.

Paylado said the 2018 component of the MCE third segment had to be suspended since the remaining area that had to be constructed still had to be acquired through an expropriation proceeding.

Tabacon also said construction works for MCE’s first and second segment have yet to start as the unsolicited proposals from three private firms remain pending.

“Our central office required the proponents to submit documents which they still need to comply,” he said.

Paylado said, the remaining 8.1 kilometers of the MCE segment three has yet to be funded.

The expressway, based on the feasibility study conducted by DPWH 7, costs about P28 billion, including payments for RROW acquisition and civil works. Of this amount, P13.4 billion is allocated for its first segment, P10.3 billion for the second segment and P4.4 billion for the last segment.

The expressway’s first segment, which spans 26 kilometers, is the arterial road from the Minglanilla-Talisay boundary to the Mandaue City-Consolacion boundary, passing through Cebu City.

The second segment starts from the Mandaue City-Consolacion boundary to Danao City with a length of 29.799 kilometers. The third segment covers the 17.15-kilometer length from the Minglanilla-Talisay boundary to Naga City. (WBS)