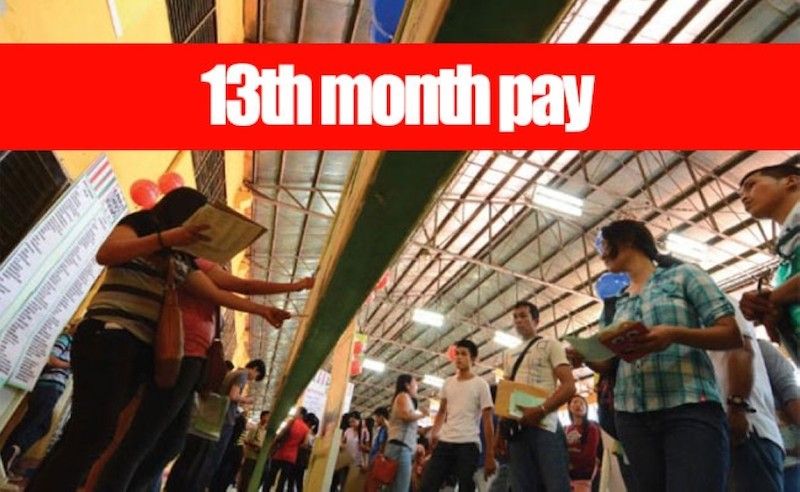 THE Associated Labor Unions (ALU) is not in favor of delaying payment of the mandatory 13th month pay for workers nor of granting exemption to “distressed” companies.

"The 13th month pay benefit at this time of the year have already been earned and accrued by employees. Therefore, 13th month payment cannot be waived or taken away by giving exemption to employers or deferment of payment," said ALU vice president Gerard Seno.

"The 13th month payment benefit, just like minimum wage, is a basic labor standard that cannot be waived or deferred," he added.

Seno noted how workers have sacrificed so much since the pandemic began.

He said many employees have suffered from reduced working hours and job rotation, while others were put on floating and furlough status without pay. Many displaced employees are still waiting to return to work.

The labor leader said some were made to adjust to a work-from-home arrangement with their wages substantially cut and benefits reduced.

Seno said there are also many others that had to spend for their Covid-19 test and have been spending more on transportation fares due to the absence of company-provided shuttle services.

The ALU called on employers and business owners to respect and abide by their obligation to pay the 13th month pay of their employees in time.

"We are calling on the employers and business-owners to take a hard look not only on their business but also at the plight of their employees, who are also hard pressed. We urge them not to forgo payment of the 13th month pay of their employees," Seno said.

The labor group also urged the DOLE to ensure that employers and businesses comply with the provisions of Presidential Decree No. 851, which mandates the 13th month pay.

"We appeal to the DOLE and to Labor Secretary Silvestre Bello III to not tinker with the 13th month pay law. Giving exemptions and deferring payment of such would make working people suffer further," said Seno.

Earlier, the Employers Confederation of the Philippines (Ecop) said some two million workers may be unable to get their 13th month pay because many companies have incurred huge losses during the lockdowns.

In response, Bello urged employers to just defer the release the 13th month pay of their employees instead of totally nixing it.

He also said “distressed” companies have the option to apply for exemption, but DOLE still has to define “distressed”.

Under PD 851, all rank-and-file employees in the private sector are entitled to 13th month pay regardless of their position, designation, or employment status, and irrespective of the method by which their wages are paid, provided that they have worked for at least one month during the calendar year.

Section 7 of PD 851 states that distressed employers may seek exemption from paying the bonus. Petitions for exemptions may be filed with the nearest regional office, which will transmit these to the DOLE Secretary. (HDT/SunStar Philippines)