Bzzzzz: Mayor's EO modifies 2002 ordinance, bans daytime karaoke but not 'My Way'... Roque not aware of Cebu situation on seniors. 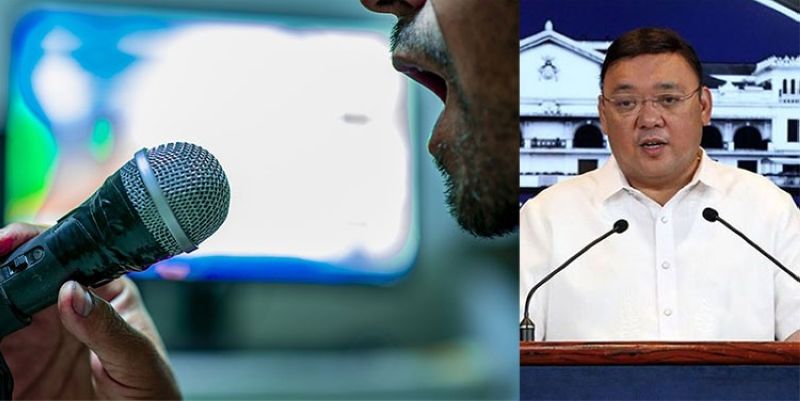 Photos from Pixabay and Presidential Communications

EXECUTIVE Order #100 dated and issued Friday, October 9, by Cebu City Mayor Edgardo Labella prohibits the operation of video any karaoke machine or unit from 8 a.m. to 5 p.m. during weekdays or Mondays through Fridays within the city.

It modifies Ordinance #1940 of August 16, 2002, which prohibits only video karaokes within residential zones or in open spaces and "displaying, exhibiting or portraying any lewd, pornographic, sexually suggestive or obscene images, among others." Neither the eight-year-old ordinance or the mayor's EO forbids the singing of "My Way," which according to urban legend moves people to violence, for or against the song.

The order cites as reason the start of online classes or long-distance learning by students and private and government employees who continue to work from home. For their sake and because the police recommended it, the EO says, the daytime ban is imposed.

The EO defines karaoke singing by specifying the equipment for the sing-along: a sound system with a TV set or monitor, video player, speakers, microphone and sound system "whereby lyrics of a song with accompanying visual backdrop are seen on a monitor or screen." People who would like to sing out, using whatever musical instruments but not the equipment specified in the EO are obviously not covered by the ban.

The police, the Army, barangay officials and their "multiplier force" are "directed " to enforce the order. Apparently, they will just stop the singing -- the noise or music -- but no arrest or detention, unless the prohibited act is covered by the city ordinance.

Roque and the Cebu situation

The president's spokesman, Harry Roque, "made clear" Thursday, October 8, that "the government has not prevented seniors from leaving their homes for essential services like work and grocery trips." He cannot understand, he said, why the national task force still has to approve it. It's already in the guidelines.

Roque probably didn't know that in some local governments, the rules are tighter than those set by IATF.

In Cebu City, for example:

[1] Some malls or department stores reportedly bar seniors from their establishment;

[2] A quarantine pass (which Jason Monteclar in his initial show called out as the biggest quarantine pass in the world) is still needed and a lot of grilling is made by police or barangay tanod on the purpose of the trip.

According to the city mayor, the LGU cannot loosen an IATF rule but it can tighten it. It can be more IATF than the IATF.

What broadcasters talked about

[1] EDGAR GUTTIEREZ, on dySS radio, in Cebuano-Bisaya: "Moviehouses in Cebu City may reopen, but will movie patrons come? The health aspect is a major concern in deciding about reopening but there's also the matter of moviegoers. Will they be persuaded to see a movie in a theater at the mall when they can just watch it on his phone?"

The problem of technology hurting the moviehouse business has long been there, reducing audiences in theaters across the world. People may now watch a movie anywhere with a smart phone. And with the pandemic, that kind of watching films has widened and increased.

Cebu operators asking to reopen must know that it is still profitable. There must still be a market for people who like the big screen and the booming sound. Or the mall owners tie the business decision with the aim to draw people to the mall. Cinemas have been part of the attraction.

By the way, Japan theater owners say they still make money even with audiences cut in half per screening. Besides, an idle theater can be bigger, worse waste of commercial space.

[2] JASON MONTECLAR, in the first episode of the "The Not So Late Show with Jason Monteclar," on YouTube and Facebook, also in Cebuano-Bisaya: "The law of the stomach is the supreme law. Hunger stalks the land. That's why crime is on the rise."

A variation of what an Army commander, Major General Franco Nemesio M. Gacal said last April 21 in a video conference with an AFP economy task group for Covid-18: "A hungry stomach knows no law," he said. "That's why we should treat the infected and protect the uninfected populace."

One looks at the hungry stomach as the superior law. The other looks at it as a rogue that doesn't recognize any law. Same point: hunger can be the immovable force these Covid days.