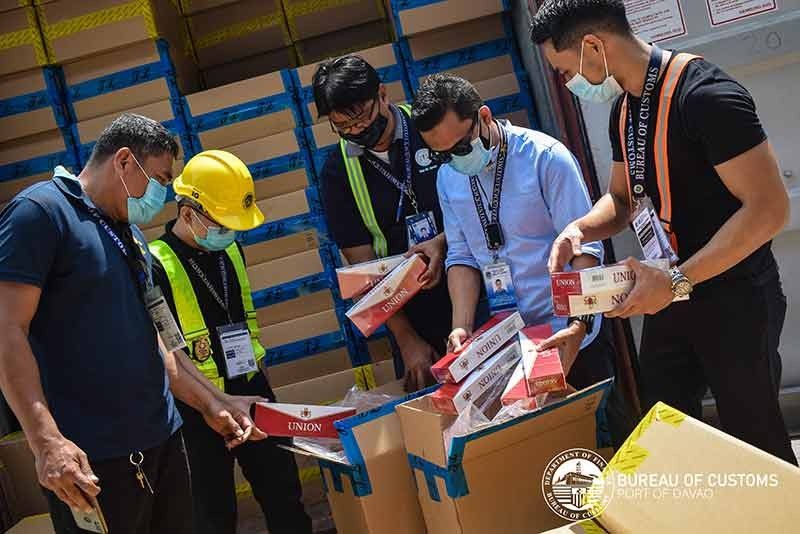 Photo from BOC-Port of Davao

THE Bureau of Customs-Port of Davao (BOC-Davao) has reported that in September 2020 alone, it has seized around P123 million worth of smuggled cigarettes from abroad in two separate apprehensions.

In a statement, BOC-Davao said it has apprehended four 40-footer container vans of illegally imported cigarettes worth P96,698,298.81 on September 24 at the KTC Container Terminal in Tibungco, Davao City.

The smuggled cigarettes were reportedly coming from China and Cambodia under the consignee Allycorp International Inc. and were originally declared as 910 cartons of plastic cups and 3,015 boxes of various fabrics.

When authorities conducted a physical examination of the shipments, they yielded misdeclared goods as these contained 3,628 boxes of assorted branded cigarettes.

The total estimated value of seized smuggled cigarettes for the whole year reached P302,235,163.06 in the total 21 apprehensions.

The bureau has already issued 21 warrants of seizure and detentions against each of the importers of these illicit articles for violating Section 1400, Section 117 of the Customs Modernization and Tariff Act and Executive Order No. 245.

BOC-Port of Davao District Collector Erastus Sandro Austria said in a statement the apprehension of the hot items from abroad is in line with the bureau’s intensified campaign against smuggling and all forms of illegal activities.