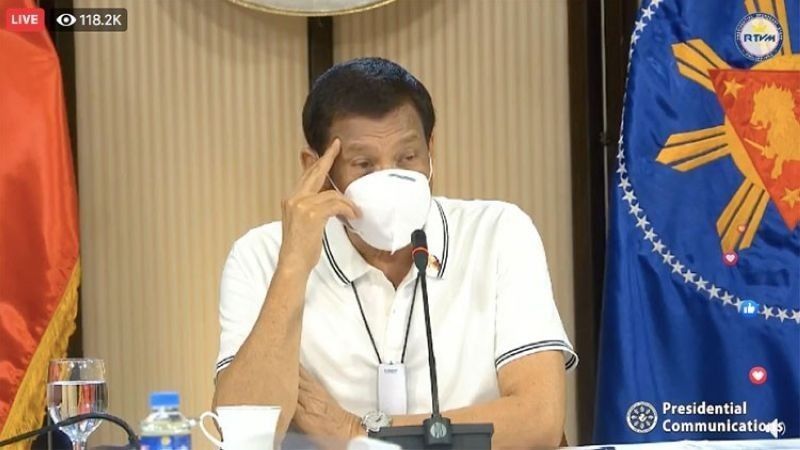 PRESIDENT Rodrigo Duterte on Sunday, October 11, 2020, reiterated his appeal to the members of the House of Representatives to stop weeks of political wrangling and focus on passing the General Appropriations Bill (GAB) for 2021.

In a message relayed by Presidential Spokesperson Harry Roque over state television, the President distanced himself from the speakership row between Speaker Alan Peter Cayetano and Marinduque Rep. Lord Allan Velasco.

Duterte issued Proclamation No. 1027 on October 9 calling for a special session on October 13 to 16 to resume deliberations on House Bill No. 7727, or GAB.

The House suspended session on October 6, more than a week ahead of its scheduled recess, shortly after terminating plenary debates on the budget bill and passing it on second reading.

Cayetano, by moving to terminate the debates and suspend session, aimed to retain the speakership until session resumes on November 16 and prevent Velasco from unseating him in line with their term-sharing agreement.

Under the term-sharing agreement brokered by Duterte in July 2019, Cayetano is supposed to serve as Speaker for the first 15 months of the 18th Congress while Velasco will assume the speakership for the remaining 21 months.

Cayetano has, however, insisted that the turnover be extended to December 2020, when the budget bill shall have been approved by both the House and the Senate.

After approval by the House, the budget bill is transmitted to the Senate. Once the Senate approves its own version of the bill, a bicameral conference committee is convened to reconcile the two versions and come up with a final bill that will be submitted to the President for approval.

Duterte reiterated his appeal for the approval of the budget without delay several hours after photos of Velasco visiting Davao City Mayor Sara Duterte-Carpio, the President's daughter, was circulated online.

Majority Leader Martin Romualdez, who took part in the gentleman's agreement, also issued a statement Sunday, saying the term-sharing agreement would be honored after the House approves the budget on third and final reading on October 16.

"Let us set aside politics and focus first on the passage of the national budget as requested by the President," he said.

"We will respect the term-sharing agreement and ensure a smooth transition of leadership in the House of Representatives," Romualdez added.

The 2021 budget is supposed to provide funds for the government’s Covid-19 response as well as for programs aimed at boosting the economy, which is in recession after two consecutive quarters of negative growth rates.

Cayetano earlier said a lot of these programs are being inserted into the budget only during the deliberations at the House because there was no pandemic yet when the executive departments prepared their spending plan for 2021.

To recall, Congress’ failure to pass the budget in 2018 led to an economic slowdown in the first quarter of 2019. (Marites Villamor-Ilano/SunStar Philippines)