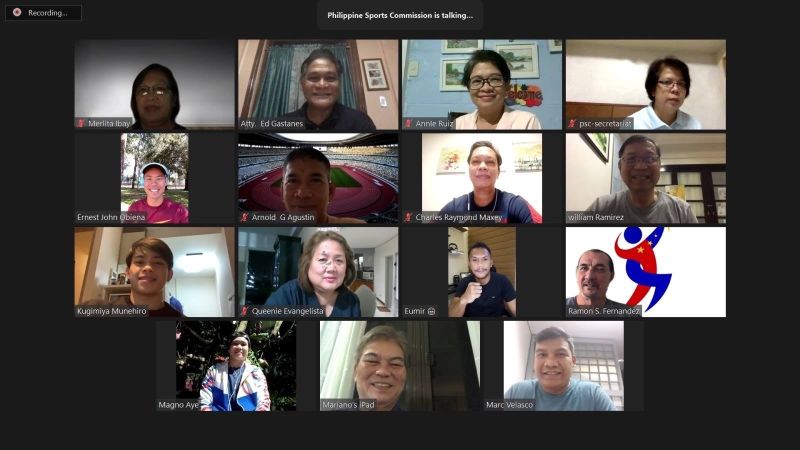 THE four Filipino Tokyo Olympics 2021 qualifiers got a needed boost after the Philippine Sports Commission (PSC) top brass cheered them on in a Zoom meeting held Friday evening, October 9.

The PSC chief and the rest of his commissioners and staff reached out to the Olympic qualifiers to know how they are currently doing amid the coronavirus disease (Covid-19) pandemic and how the national sports agency can help them with their preparations for the Games.

Ramirez said, "This is nothing formal. Gusto lang namin kayong makita kasi noong nag pandemic (We just wanted to see you), we were worried. I'm happy that all of you are alright and well."

Italy-based Obiena and Japan-based Yulo both shared that they gained weight since the pandemic struck. However, Obiena said he has been working closely with his nutritionist after gaining some weight at the start of the season.

"I will get back in shape," Obiena, who recently bagged a gold medal for the Philippines in the 59th Ostrava Golden Spike Tournament in the Czech Republic, vowed.

Yulo, for his part, said that he also gained weight but had since gotten back in shape and is seriously maintaining it.

Marcial said he is excited about his training, which he believed would give him an edge against his competitors in the Olympics. He was set to leave for the US Sunday, October 11, to train under renowned coach Freddie Roach at the Wild Card Gym as a professional boxer under Senator Manny Pacquaio's stable.

Ramirez then teased Marcial about improving his English as he would be meeting a lot of people in the States, which elicited laughter from the boxer and the rest of the Zoom attendees.

Meanwhile, Magno continues to train online at her hometown in Janiuay, Iloilo.

The PSC Commissioners also expressed their belief in Yulo, Obiena, Marcial, and Magno. They urged them to train harder as their countrymen, President Rodrigo R. Duterte and the PSC are always behind them.

As the meeting came to a close, Ramirez reminded the first time Olympians to keep their focus, use their time wisely, and regularly connect with their parents.