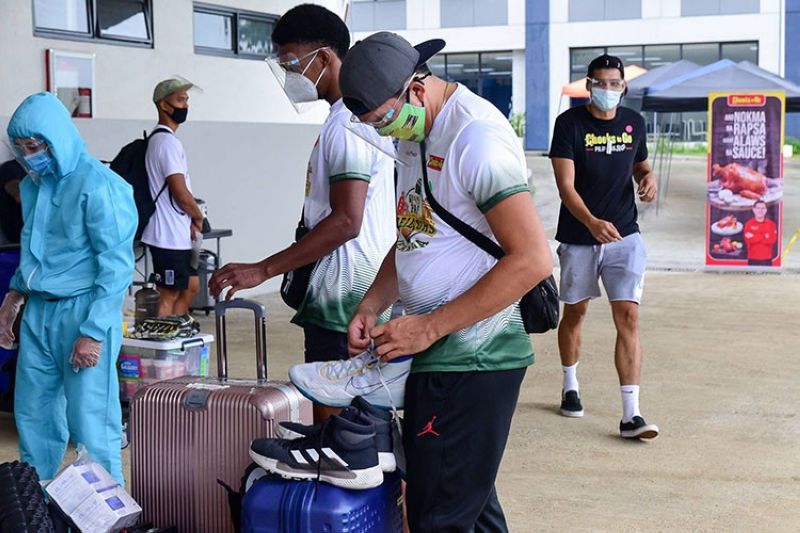 Players of the Chooks-to-Go Pilipinas 3x3 President's Cup have begun entering the “bubble” at the Inspire Academy in Calamba, Laguna. (Chooks-to-Go photo)

The Chooks-to-Go Pilipinas 3x3 President's Cup powered by TM is keen on playing a huge role in the country’s return to sports.

With the sports scene stagnant for most of the year because of the health crisis, the staging of the Chooks-to-Go Pilipinas 3x3 President's Cup on October 21 is set to give basketball fans and sports enthusiasts alike a jolt of new life.

"Actually, our main goal is to restart sports and hopefully, through this, we'd be able to inspire other leagues to be able to start also," said league commissioner Eric Altamirano in an online press conference.

The first leg will then kick off on October 21 followed by three more legs every other day in this tournament that has Gatorade as its official hydration partner. Finally, P1-million will be up for grabs in the Grand Finals of this FIBA 3x3-endorsed tournament slated for October 30.

The heavy favorite to win it all is, without a doubt, Zamboanga with national team players Munzon and Pasaol together with pool members Troy Rike and Cebuano standout Santi Santillan.

The latest conference of the newly accredited professional league which is also endorsed by FIBA 3X3 is all systems go with seven of its 12 teams already inside the bubble hosted inside INSPIRE Sports Academy in Calamba, Laguna.

The players were satisfied with the safety and security inside the “Calambubble” as health standards were upheld from the moment they entered.

"The experience was pretty good. A lot of safety protocols out there and they were well-executed. Everything has been top-tier on keeping everybody safe and healthy," said Munzon.

Already having undergone RT-PCR testing a week ago, all players had to go through another round of tests right before getting inside NU's state-of-the-art new campus for the tournament, which has Gatorade as its official hydration partner.

Once inside, everybody was made sure to be taken care of.

"They cleaned our bags, got our temperature checked, made sure that we have meals to eat. Everything's been taken care of and I can be assured that I'm safe and clean," said Gab Banal from contender Nueva Ecija Rice Vanguards.

Once the games begin, there will, of course, also be rules to follow including the limiting of contact during celebrations.

"We will still be practicing our health standards inside the bubble so handshakes and high fives are discouraged during the conduct of the games," explained Dr. Willie Ong, who functions as Chooks 3x3's health consultant.

The same goes for non-players as they will have to observe social distancing while wearing face masks and shields.

While the tournament is ongoing, there will also be random tests and in the case of a positive result, there are already measures in place. As Dr. Ong put it:

"We will immediately bring him to the isolation room for retesting and if found positive again, we will be isolating him and sending him out of the bubble then do contact tracing. The goal is for early detection and early separation."

With all this, the Games and Amusements Board can do nothing but congratulate the Philippines' pioneering 3x3 league in its resumption of action.

"We'd like to commend the Chooks organization. Thank you very much for helping us adapt and we want GAB to be in tune with the times helping you," said chairman Baham Mitra.