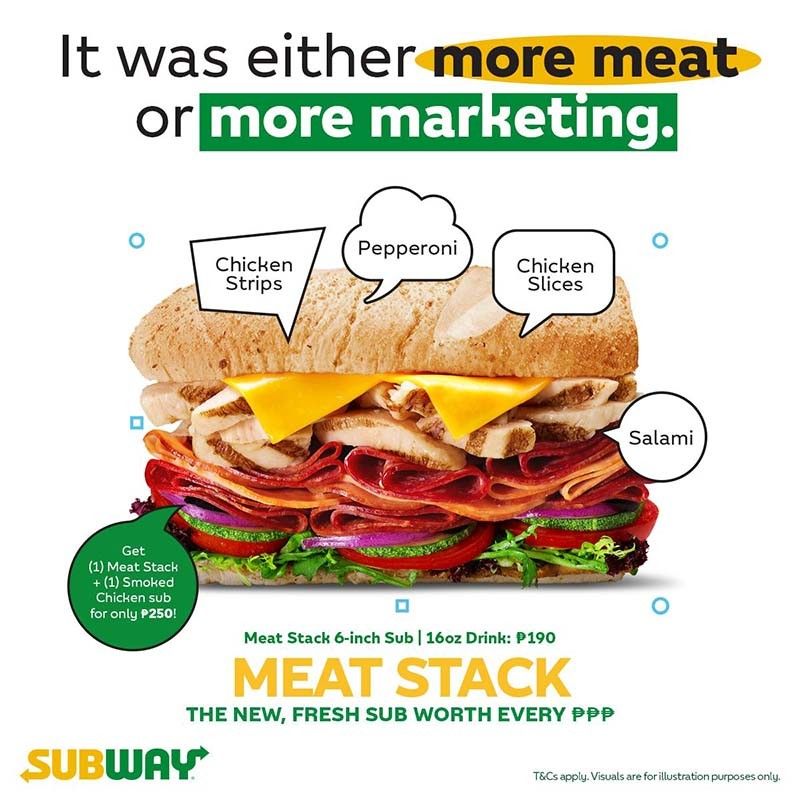 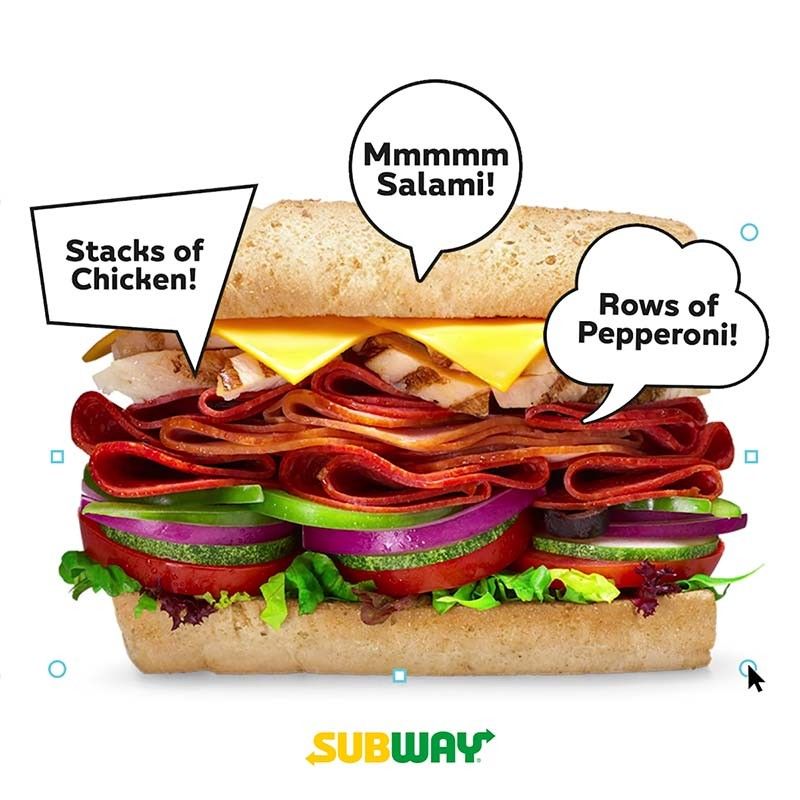 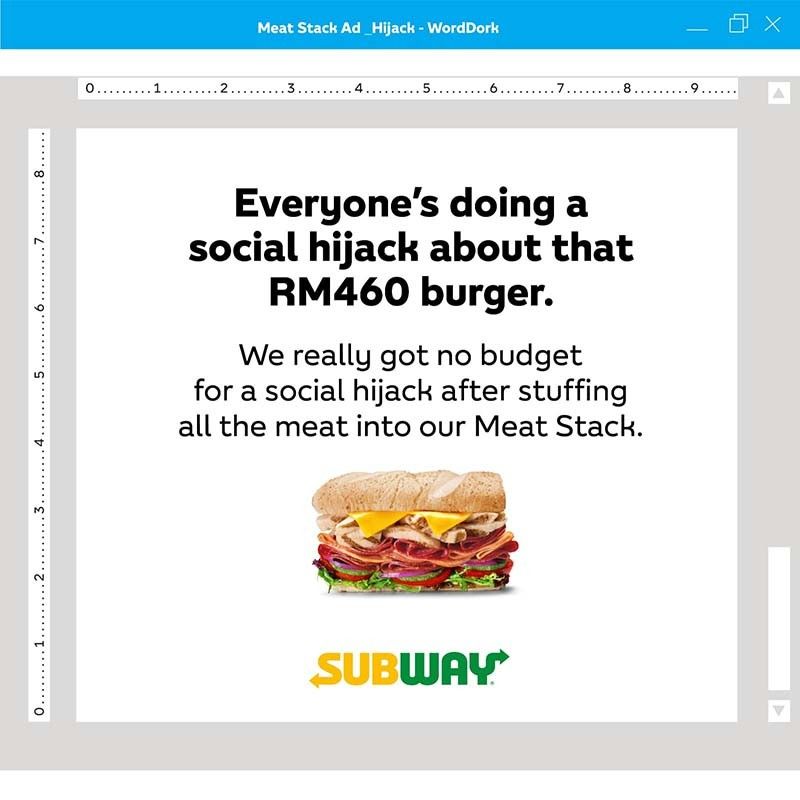 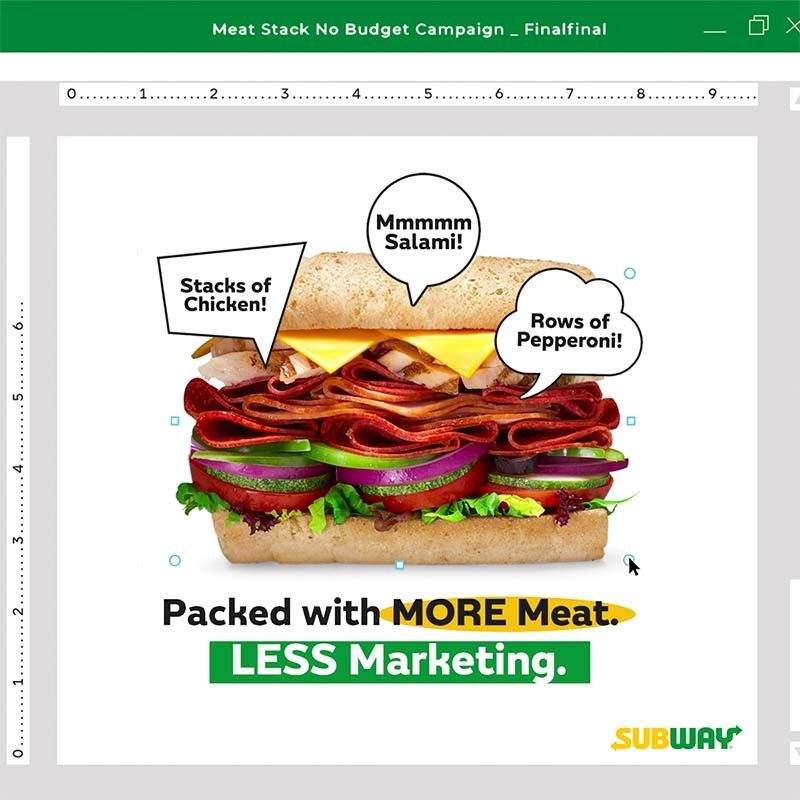 FROM Oct. 5, 2020 to Jan. 5, 2021, Subway® will be providing customers with a fully loaded Subway meat stack sub that’s worth every peso. With layers of chicken strips, pepperoni, sliced chicken and salami, the new Meat Stack sub is going to be the perfect choice for meat lovers or anyone with a hearty appetite to feast on.

But this new menu came with a cost for the international submarine sandwich brand.

Subway disclosed through its FB page that they were "sandwiched" in their budget plans this year as they were left with two options. It was either to provide more meat to their subs or more budget for marketing.

For Subway, the answer was obviously simple. Subway wanted to provide a hypervalue sub (which is a type of sandwich made from a cylindrical bread roll split lengthwise) with fresh meat even with the limited marketing budget that they have. 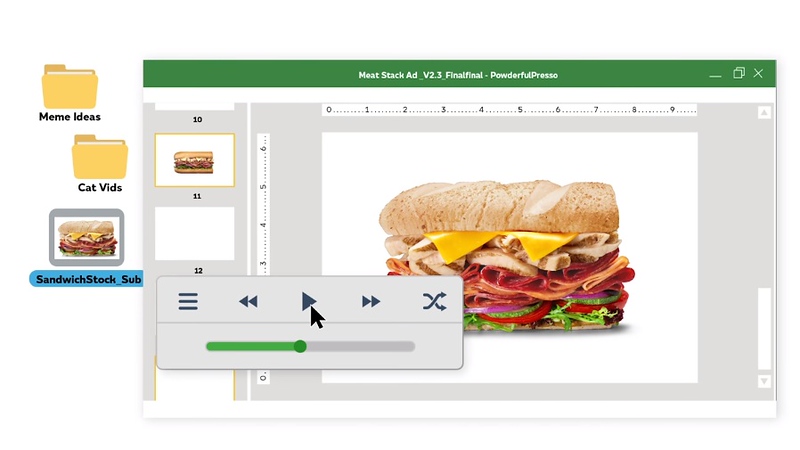 Subway launched the more meat, less marketing campaign with its low-budget-looking ad to promote its new menu. The ad is 15 seconds long and greets its viewers stating that its "advertisement was made by an intern on budget.”

It then proceeds to show the process of how the ad was created using a software that is similar to Microsoft Powerpoint.

Subway even disclosed that it didn't pay for a copywriter to make this happen. It added hashtags such as #LessMarketing4MoreMeat to get the message across of the slash in its marketing budget. 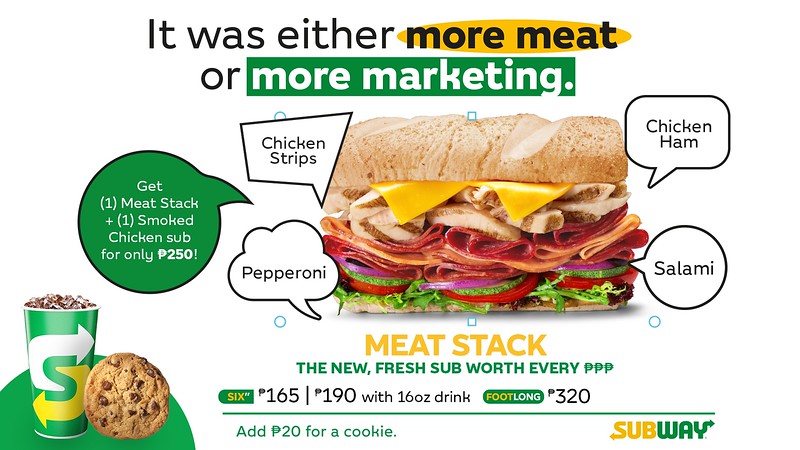 Subway sends a clear message and that is, it has chosen to provide more budget to add more meat for its subs than its marketing campaigns. And it has thrown in a sweet deal of its delicious chocolate chip cookie for only P20 as an add-on.

Subway also offers customers the chance to taste their fully loaded menu at the comfort of their homes and offices with just a little add-on price for its delivery through the Grab and LalaFood App. And prices for delivery will vary depending on the customer’s location.

One may also check out the 250 Twin Deal which has a six-inch Meat Stack a la carte plus a six-inch smoked chicken for the price of P250. 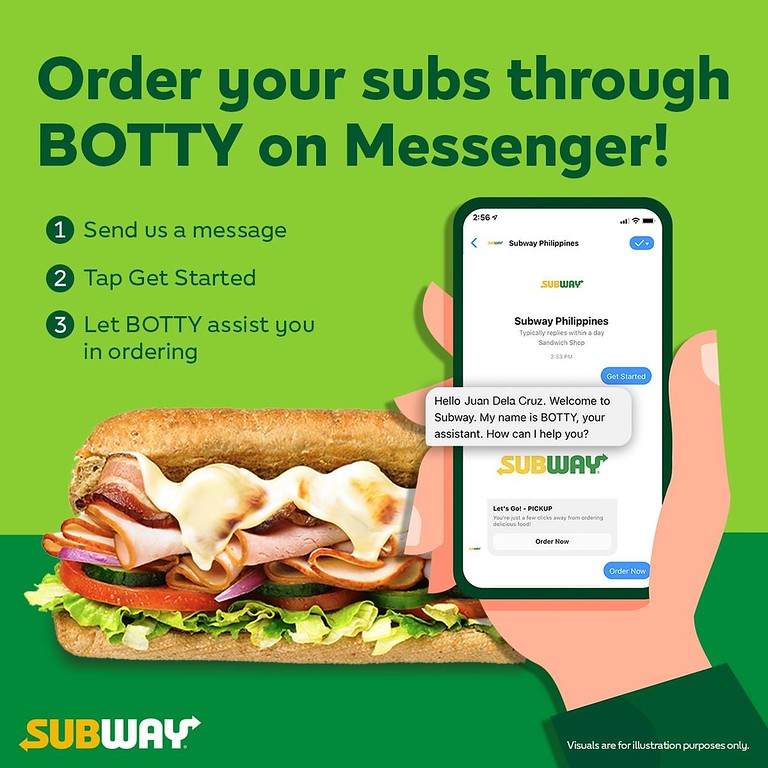 Subway is also enabling and practicing seamless transactions with its helpful chatbot “Botty” via Messenger. Subway takes the frustration out of queuing for meals and greatly reduces the waiting time. It’s totally convenient and easy to use Botty via Messenger as it works in three simple steps: Order, Pay and Collect!

Once customers have decided on what they’ll have, Botty via Messenger will provide a summary of their orders and the total amount to pay.

Botty via Messenger will provide customers with an order number and will keep them updated on the status of their transaction. Botty will then alert them when their order is ready for pick-up. They just have to provide the payment and they’re ready to go.

The New Meat Stack sub is only available for the 29 Subway branches in Luzon. Although Subway's branches at RCBC Plaza, Festival Mall and Ayala Manila Bay are currently closed due to the novel coronavirus pandemic, if they can resume operations during the promo period, the Meat Stack sub will also be available at these branches.

The campaign was inspired by existing and real problems of the advertising industries during the Covid-19 pandemic. Budget cuts for brands and agencies all year round are happening and can limit or put on hold multiple marketing campaigns.

But creativity has always been best exercised during a pinch. And since the Subway Meat Stack holds a lot of value in its meat, it was an interesting angle to ride out and actually mention: that Subway had put so much meat in the sub that it ran out of marketing budget.

For the campaign’s art direction, Subway wanted it to be “super lo-fi,” a term for the music or sound where imperfections are deliberately shown. And this was applied as the campaign was done on a non-creative tool or a plain presentation software.

While Subway surely took the joke of using simple presentation softwares into ads, the campaign isn’t only for humor but also aims to touch on the situation that many advertising agencies are currently facing during the Covid-19 pandemic.

And the result of the campaign has been clear that with its budget cuts, the true value of the product has been successfully portrayed. And even with limited resources, just by having a good advertising team with limited budget doesn’t mean that they cannot come together to make a campaign that is both refreshing and fun. SPONSORED CONTENT