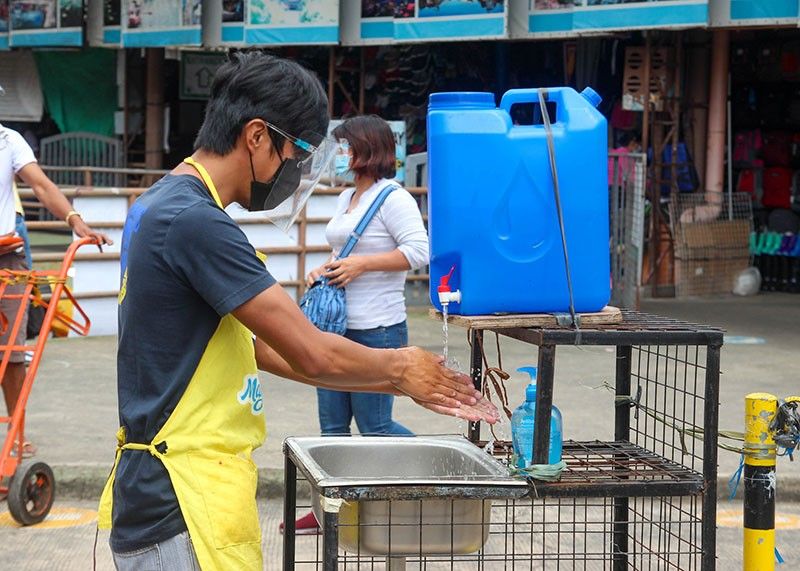 SIMPLE AND EFFECTIVE. A man washes his hands at the Baguio City Public Market. Experts continue to remind the public that proper hand washing is the best way to prevent Covid-19. (Jean Nicole Cortes)

"It cannot be reasonably ascertained that its proposal provides the greater advantage and benefits to the community and revenues to the city than the proposal of SMPI," the memo stated.

On the other hand, the proposal of SMPI is found susceptible to the qualification in order for the City to ascertain advantages and benefits to the community and revenues to the City.

Signed by Magalong last October 14, the memo stated that the certificate of non-acceptance will be issued to Robinsons.

The decision was based on factors like completeness of documents, area to be developed, modality, project duration, financial viability, technical design, economic benefits and environmental consideration.

On technical design, Magalong said SMPI provided substantial details although with some deficiencies. These can be subject to negotiation, while the submitted technical designs of RLC are not professionally prepared and lack details for thorough evaluation.

The electronic mail from RLC received by the P4-SC secretariat stating therein they can only submit the Detailed Engineering Design for the market once they are declared as the OPS is a show of resistance to comply with the requirements of the P4-SC, he said.

On economic benefits, the mayor said SMPI provides more detailed estimates of economic benefits, while RLC did not provide substantial data as basis for evaluation and most of the descriptive benefits are generic, which can also be provided by the SMPI.

For environmental consideration, SMPI provides building design featuring environmentally friendly facilities for the public market, such as a water treatment facility with a tertiary plant, well designed Materials Recovery Facility to handle solid waste separating the biodegradable and non-biodegradable wastes, a separate and controlled room for hazardous waste and a green sky garden.

“There is a manifest error not only in the evaluation of the P4-SC that the proposal of the RLC is complete but also in the determination that the proposal provides greater advantage and benefits to the community and revenues to the city. We also do not agree with the subject memorandum that the substance of the proposal of RLC will only be extensively evaluated at a later time for the reasons already stated. Perfection is not within the purview of the P4-SC, however this office, as the approving authority, must exercise with great care and caution, the power to award an OPS to a certain proponent. Although an OPS does not automatically carry with it the award of the project, the grant is not trivial or of little importance as the original proponent shall gain advantage by a Right to Match comparative and superior proposals under the Swiss Challenge procedure,” Magalong said.

Jeoffrey Larua, Tongtongan ti Umili secretary-general, has raised opposition on the decision of the mayor to award the OPS to SMPI, saying the move to award the OPS to rehabilitate the Baguio City Public Market only goes to show that the mayor is more keen on favoring the interests of big corporations rather than the citizens he is supposed to serve.

“The city executive’s move comes as clamor for the defense of Baguio Market from mall giants like SM and Robinsons intensify. This, when the consortium of local market cooperatives have already developed and presented a challenging, more viable, and equally impressive proposal against those of the mall giants,” Larua said.

The groups reiterated its opposition, saying “while the battle for the rehabilitation of the city market still goes a long way, this latest news clearly shows the on-going corporate takeover of a city that is already plagued with problems brought about by the entry of large-scale, destructive, profit-centric development.”

TTU appealed to the citizens to unite against this impending threat to the public market by reliving the struggles and lessons we saw these past years.

“We cannot let another corporate giant stake their claim in yet another public space. In the fight to #SaveBaguioMarket, let us fully support the efforts of our local market cooperatives. Let us be vocal in resisting the corporate takeover of our city, especially in these embattling times,” added Larua.