Ambulance eyed in all Benguet towns 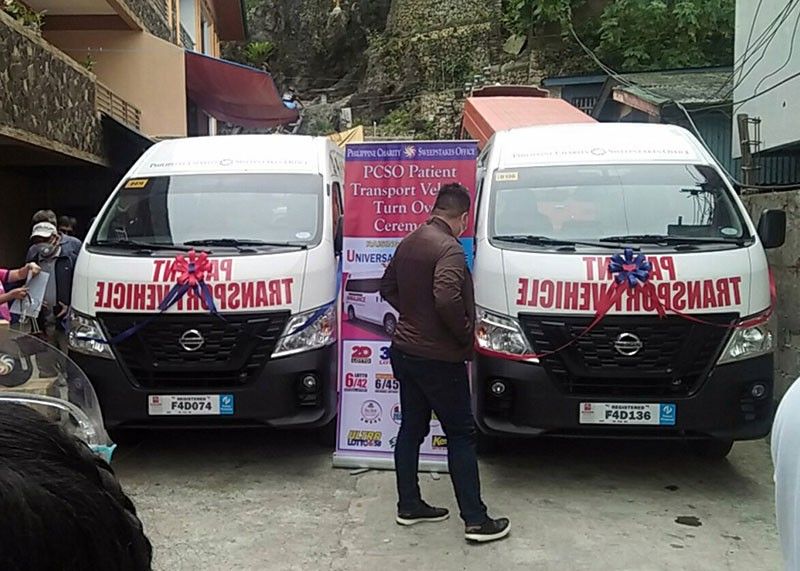 PATIENT TRANSPORT. Two ambulance units worth P3.2 million and P200,000 worth of medicine were turned over to different Benguet towns on Friday, October 16, 2020, by the Philippine Charity Sweepstakes Office. (Lauren Alimondo)

LA TRINIDAD -- All thirteen towns of Benguet are being equipped with an ambulance, each to cater to health care needs of stakeholders.

Kevin See, chief-of-staff of the Office of Benguet caretaker Eric Go Yap, said Friday, October 16, that the lawmaker is looking into providing all the 13 towns and district hospitals in the province with ambulances.

On Friday, the Philippine Charity Sweepstakes Office (PCSO) turned over two patient transport vehicles to the local government units of Bakun and Kapangan, two of the northern towns in Benguet.

The PCSO also provided P200,000 worth of medicine to the towns of Buguias, Tublay and La Trinidad.

Marie Louise Serojales, PCSO consultant for charity and representative of General Manager Royina Garma, said both transport vehicles worth P3.2 million were approved by the board.

Serojales said the Benguet municipalities were identified by Yap as the towns the needed the vehicles the most.

She said Benguet Province is also one of target areas in 2021 to be given vehicles, aside from other provinces in the country, citing the two vehicles donated to Benguet towns is the 254th and 255th units given by PCSO.

She said 40 more units are set to be released in Manila.

Serojales said the ambulance will be used to transport patients and it is equipped with a stretcher, blood pressure apparatus and oxygen tank.

Kapangan Mayor Manny Fermin and Bakun Mayor Bill Raymundo thanked both offices for their aid to their respective towns.

The mayors said there is a need for more ambulance units, as existing vehicles have been used for the past six to 15 years.