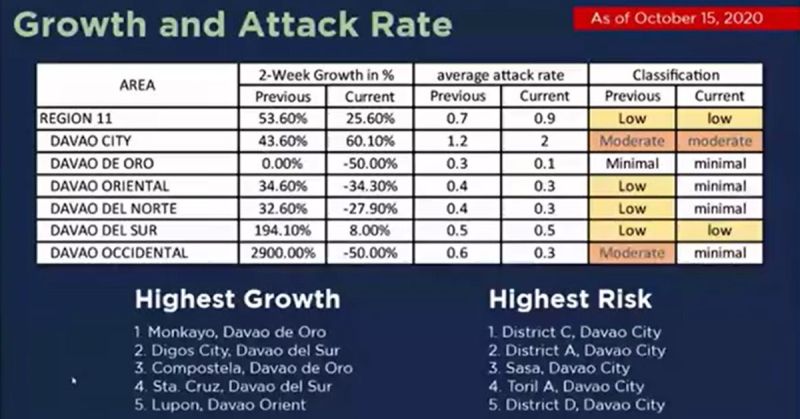 THE Department of Health (DOH)-Davao has recorded a rising Covid-19 growth rate in Davao City for the past two weeks.

Based on DOH-Davao's data as of October 15, the city's current two-week growth rate is at 60.10 percent, compared to the 43.60 percent recorded in the past three to four weeks.

DOH-Davao Assistant Director Lenny Joy Rivera said on Friday, October 16, in the One Davao on Covid-19 virtual presser that the two-week growth rate is a measurement that shows how quickly the number of cases is changing in the two-week period.

Meanwhile, the city's daily average attack has increased from 1.2 to 2 percent.

Rivera said the attack rate provides the incidence or how many confirmed positive cases per 100,000 population.

"For the attack rate, diyan natin nakikita yung risk natin (we are able to see the risk) of having an infection or the burden of a disease in a specific area and a specific time," she said.

Based on this data, DOH-Davao deemed both rates in the city under "moderate" level.

Rivera said both the growth and attack rate are being used as indicators in the current Covid-19 situation in the ground, particularly on what measures needed to be improved to curb the further transmission of the Covid-19.

She said this rate was the city's reference in its reimposition of strict measures such as the 7 p.m. to 5 a.m. curfew and liquor ban.

"That's the reason why the City Government [has] conducted different measures such as curfew, maraming meetings, and monitoring," she said.

Based on the DOH's presentation, five areas in Davao City are classified as the areas with the highest risk of Covid-19 transmission. These are District C, District A, Sasa, Toril A, and District D.

Rivera said that Districts A, C, and D classification of DOH is different from the congressional districts of the city. She added they have yet to release an expounded list of areas classified under DOH's district classification.

Rivera previously said there is already a recorded clustering of cases in "confined settings" such as in jails and workplaces.

However, the two-week growth rate of the entire region had decreased from 53.60 percent to 25.60 percent. The average attack rate, however, slightly increased from 0.7 to 0.9. Its rate classification still remains under "low" level.

"Pinag-aaralan talaga namin every week, everyday, kung ano po 'yung mga areas kung saan mataas ang attack and growth rate para mabigyan natin ng preventive measures na pwede gawin, and monitor if the minimum health standards ay nasusunod (We study both rates every week, and every day. We also monitor the attack and growth rate of these areas so we could place preventive measures to be placed, and monitor if the minimum health standards are highly observed)," Rivera said.

Rivera also disclosed that mass gatherings had been highly attributed to the increase of Covid-19 transmission in the entire region.

Rivera said this was also the reason the City Government imposed the 7 p.m. to 5 a.m. curfew since most parties are held right after work hours, mostly 5 p.m. onwards.

The DOH official said they had recorded a certain case where a Covid-19 patient was able to have a close contact with 27 partygoers and 18 of them tested positive as the result.

Rivera previously reported a change of trend in the clustering of Covid-19 cases as transmissions in workplaces of 12 establishments were reported.

She said a total of 50 cases from the 12 establishments were recorded. Out of the 50, 33 are still recovering. The majority of them are asymptomatic.

Rivera said they saw changes in the clustering of cases when the region shifted to modified general community quarantine (MGCQ).

Under the MGCQ status, more establishments are allowed to resume operation to gradually revive economic activities.