Public told: Be wary of QR codes for sale 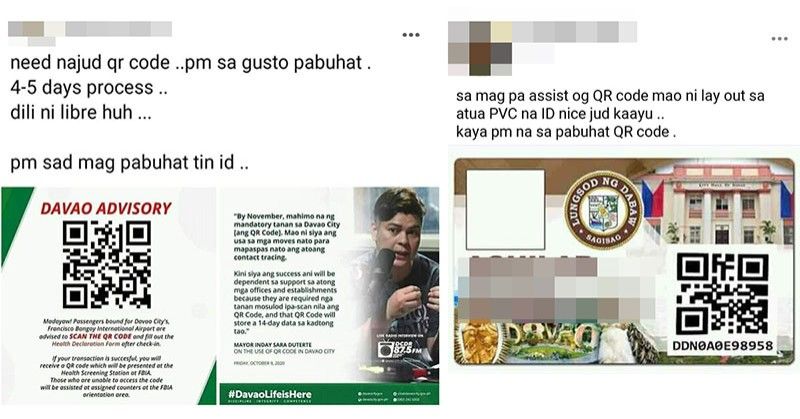 DAVAO City Mayor Sara Duterte Carpio warned Dabawenyos not to patronize quick response (QR) codes from online sellers as these will be rolled out for free.

"Kinahanglan mag-ingat ang mga tao sa mga ingon aning QR Code for sale because dili siya ma-imbento and wala pa ta naghatag sa site nga asa mag-apply og QR Code. Wala pa pud ta naghatag og date kung kanus-a ta mag-implement sa atoang QR Code (The public needs to be wary of this QR Code for sale because it is not manually generated, and besides, we have not yet released a website where they can apply for QR Code nor the specific date for its implementation)," Duterte-Carpio said in an interview via 87.5 FM Davao City Disaster Radio on Friday, October 16.

This came after some individuals were noted selling QR codes online days after the mayor announced that the City will be implementing the system, which is seen to help in the city's Covid-19 contact tracing effort.

Concerned Dabawenyos have forwarded screenshots of individuals selling QR Codes to SunStar Davao. A certain netizen even created a layout of the QR Code incorporated in an ID card. These posts, as of Friday afternoon, can no longer be seen online.

Duterte-Carpio explained that a QR code cannot be manipulated by anyone since it is computer-generated.

She said the City Government will be posting the link, website, or the specific application where the public can apply for their own QR code.

The mayor said the processing of the QR code will be generated immediately once the applicant will be able to fill out the complete details accurately.

Since there will be no "pre-approval" process, the City Government will conduct a "post-audit" where it will be reviewing the application data registered in the city's system.

Once the system auditor notices any discrepancy or questionable information in the application, the city can revoke or cancel the issued QR code.

"The only time nga i-cancel namo imong QR code is kung makita sa review nga basura imong gibutang nga mga details nga gikinahanglan namo (The only time we will cancel their QR code is when we would be able to determine unscrupulous information provided)," she said.

With this, the mayor encouraged applicants to provide accurate data and other information needed.

Duterte-Carpio said one of the requirements for the QR code system is a valid government ID. For those who do not have any government ID, the mayor said a birth certificate from the Philippine Statistics Authority will do.

Once it is fully implemented, she said the city will be able to determine the movement and travel history of an individual, especially of an infected person. It will also identify those who may have been in close contact or exposed to an infected person.

But the mayor said she will still have to issue an executive order where the full details of the QR code implementation will be indicated, including details on how the public can apply for it.

Movements will be regulated, she said, once the QR code system will be implemented as establishments will soon be requiring it before a person will be allowed entry.

Duterte-Carpio also said the QR code "will solve" the unnecessary travels made by some during daytime since the city lifted the food and medicine (FM) pass and its coding scheme.

For individuals who do not have smartphones, she said they can download their QR code and have it printed as their copy.

As of now, Duterte-Carpio said the QR code is still under works by a software developer outside the city.

She initially said that they are targeting to fully implement it by November 2020.