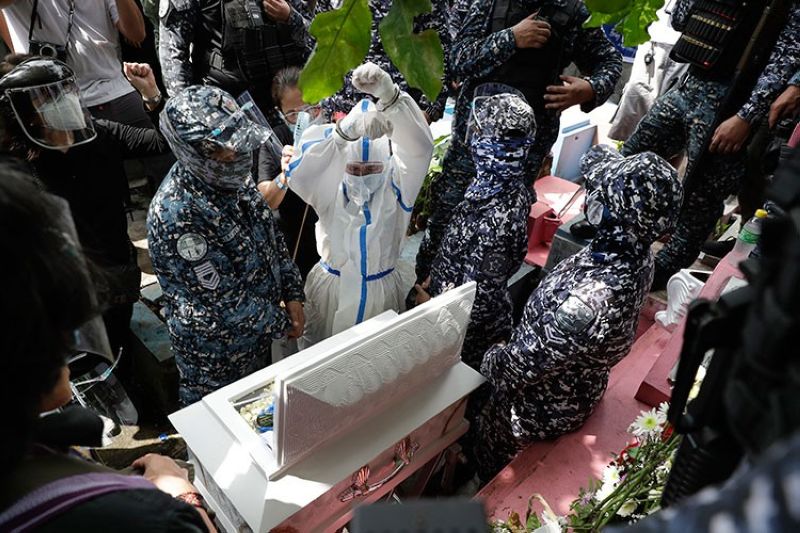 MANILA. Detained left-wing activist Reina Mae Nasino in handcuffs and wearing a protective suit to prevent the spread of the coronavirus raises her clenched fists during funeral rites for her three-month-old firstborn named River at Manila's North Cemetery, Philippines on Friday, October 16, 2020. (AP)

PHILIPPINE left-wing groups on Friday, October 16, criticized the treatment of a detained activist who was allowed by a Manila court to attend her baby’s burial but was forced to wear handcuffs and a sweltering protective suit and was heavily guarded by armed escorts as she quietly wept.

Critics have pointed to the treatment of Reina Mae Nasino and her three-month-old daughter, River, as indicative of what they say is the “barbarity” of President Rodrigo Duterte and law enforcers toward perceived opponents.

Nasino, a 23-year-old human rights worker, and two other activists were arrested last year in the Manila office of a left-wing group. They were charged with illegal possession of firearms and explosives but their lawyers alleged that the weapons, including a grenade, had been placed by police in the office. Police have denied the allegation.

A Manila court granted Nasino three hours Wednesday, October 14, to visit her baby’s wake, where she was prevented by her jail escorts from speaking to journalists, and another three hours on Friday, October 16, to attend the burial. Dozens of police and jail guards secured her, including a heavily armed Swat team for the burial.

At the cemetery, Nasino struggled to wipe her tears with her handcuffed hands and face mask and shield as she stood holding her baby’s white coffin. Her armed escorts rejected appeals to remove her handcuffs even briefly as she grieved.

Dozens of placard-carrying protesters were prevented from marching from the funeral parlor to the cemetery, where only about 30 of Nasino's relatives and friends were allowed in.

“Such cruelty and barbarity is unacceptable,” said Renato Reyes, a leader of the left-wing group Bayan.

Interior Undersecretary Epimaco Densing III told the ABS-CBN news network that more law enforcers secured Nasino during the burial because her case had drawn public attention, but denied it was “overkill.” He said the protective suit was used because of the coronavirus pandemic.

Nasino was pregnant when she was arrested and gave birth under guard in a Manila hospital in July, said Edrre Olalia, one of her lawyers. She was separated from her baby, who was cared for by Nasino's mother and died of acute gastroenteritis.

The Commission on Human Rights said it is investigating Nasino’s case “considering that there are allegations that her detention is a form of harassment due to her human rights work.”

DILG spokesperson and Undersecretary Jonathan Malaya, in a statement on Friday, October 16, 2020, said the activists had intentionally provoked personnel of the Bureau of Jail Management and Penology (BJMP) in order to create “media spectacle.”

“The BJMP jail officers assigned to escort Nasino were insulted, harassed and verbally abused by leftist groups aligned with Ms. Nasino. Truth be told, it was the leftist groups who caused the tension during the wake when they suddenly vented their ire on the BJMP officers who were just doing their jobs,” Malaya said in a statement. “The intent of the group in the wake was clearly to provoke the jail officers in order to create a media spectacle, hog the headlines, and portray the BJMP and the government, by extension, as heartless and insensitive to the plight of Nasino,” he added.

Malaya maintained that the jail guards, who escorted Nasino in the wake as ordered by the court, acted with professionalism, restraint, and integrity despite the provocation, insults, and harassment they faced from the critical crowd.

“What was supposed to be a solemn occasion for a mother to peacefully grieve (over) the death of her daughter was intentionally turned into a media spectacle at the clear instigation of these leftist groups,” he said.

“We commiserate and condole with Ms. Nasino and respect her right to grieve the death of her daughter. However, we condemn in the strongest terms the acts of these leftist groups that placed the security of Ms. Nasino and the lives of our jail officers at risk,” he added.

Malaya also clarified that Nasino is not a political prisoner as she was arrested for illegal possession of firearms and explosives. (AP/Third Anne Peralta-Malonzo)