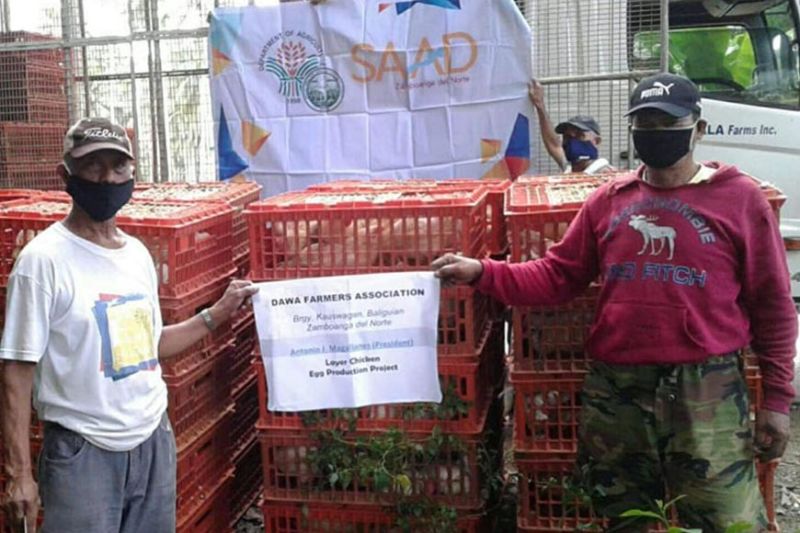 The Department of Agriculture, through the Special Agricultural Area for Development, provides livelihood assistance to two farmers association in Zamboanga del Norte that are into Layer Chicken Project. A photo handout shows one of the group-beneficiary of the livelihood who received layer chicken along with fabricated cages. (SunStar Zamboanga)

THE Department of Agriculture (DA), through the Special Area for Agricultural Development (SAAD) has provided livelihood assistance to two farmers associations in the province of Zamboanga del Norte.

Cedeño said that 18 modules of layer chicken with fabricated cage were delivered Friday, October 16, 2020, to the New Lituan Farmers Association in Siocon.

Cedeño said that the layer chicken with fabricated cage project is also packaged with one unit wheelbarrow, two shovels, and 200 egg trays.

Cedeño said the farmers association will also be receiving assistance for Corn Production Project this year.

The agriculture official said that the Dawa Farmers Association in Baliguian received another 10 modules of the Layer Chicken Project on Thursday, October 15, 2020.

He said that the Dawa Farmers Association is a farmer partner of DA-SAAD program since 2018.

He said they initially received 18 modules from the 2018 SAAD program and now, they have a total of 28 modules of the layer chicken project.

He said that each module consists of 48 heads of layer chicken along with fabricated cages.(SunStar Zamboanga)