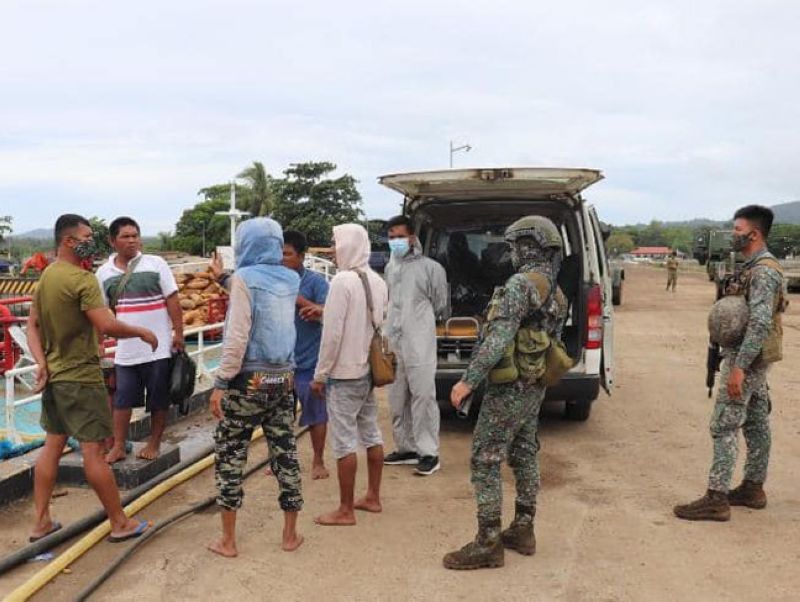 ZAMBOANGA. The Naval Task Group Sulu of the Joint Task Force Sulu rescued Saturday, October 17, 2020, five fishermen in the vicinity of Bacungan and Panganaa Islands off Bonbon village, Patikul, Sulu some 17 hours after their fishing boat capsized. A photo handout shows four of the five rescued fishermen upon arrival at the port of Jolo and to be taken to the hospital for a medical check-up. (SunStar Zamboanga)

OPERATIVES of the Naval Task Group Sulu have rescued five of the six fishermen whose fishing boat capsized amid the inclement weather condition off Sulu, a top military official said.

Gonzales said they were rescued by the Naval Task Group Sulu personnel under Colonel Ruben Candelario, who dispatched a Multi-Purpose Attack Craft upon receipt of the report from municipal officials of Patikul town.

The five fishermen, after their rescue, were taken to the Rural Health Unit of Patikul for a medical check-up.

Gonzales said they are still searching for Arman Pulalon, the last remaining passenger who remained missing.

He said the Joint Task Force Sulu troops are also capable of conducting Humanitarian Assistance and Disaster Relief operations to save lives aside from providing security to the public. (SunStar Zamboanga)