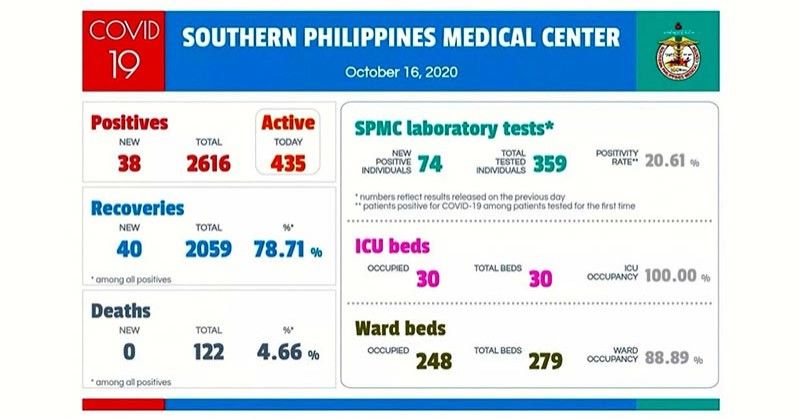 Based on the Covid-19 report posted on SPMC's official Facebook page, all of its 30 ICU beds had been fully occupied.

This is the second time SPMC's ICU beds have been exhausted. The first one happened on October 5.

As of October 17, the occupancy rate of the ICU beds has decreased to 93.33 percent.

Davao City Mayor Sara Duterte-Carpio revealed this as one of the main reasons for the reimposition of the stricter curfew and other regulations in the city.

"There is a need to control the surge kay nag-signal na ang SPMC kay and ilang occupancy is almost full na. (because bed utilization at SPMC is almost full)," Duterte-Carpio said on Monday, October 12.

SPMC officer-in-charge Dr. Ricardo Audan told SunStar Davao in a phone interview on Tuesday, October 6, they are continuing to scout for more beds to cater to the rising number of Covid-19 patients being admitted to the hospital.

Audan said the surge of admitted patients is due to the lack of coordination of hospitals outside the city with SPMC.

Meanwhile, DOH-Davao's overall critical care utilization rate of all designated Covid-19 beds in Davao Region is at "warning zone," as of October 13.

Ward beds in the entire region are at 72.83 percent.

Rivera said they are already forming a Covid-19 surge capacity plan after the ward beds for Covid-19 patients in Davao Region reached the "danger zone."

SPMC and Davao Regional Medical Center in Tagum City, Davao del Norte are the only designated Covid-19 referral hospitals in the region.