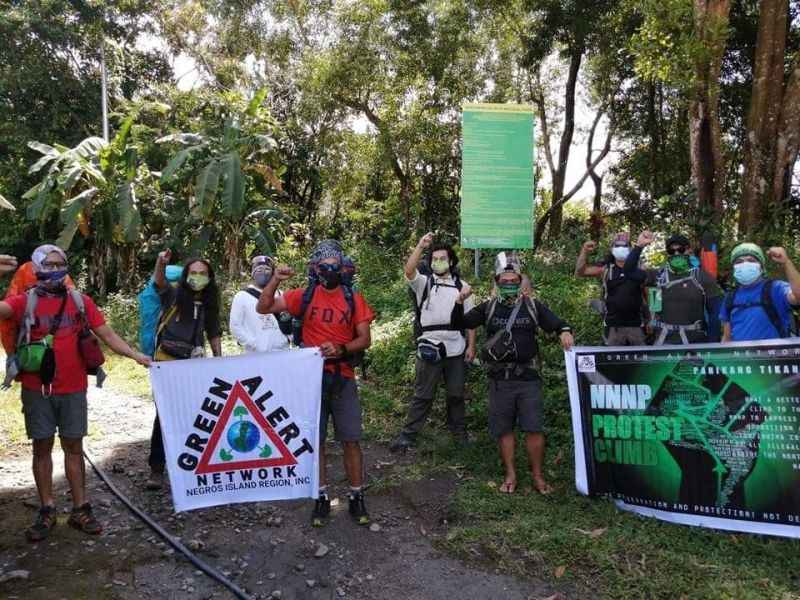 THE Green Alert Network-Negros, along with other organizations and concerned citizens in the province, has stood with the recent "protest climb" staged to raise awareness on defending the Northern Negros Natural Park (NNNP) from the ongoing road construction and illegal structures.

The environment group, in a statement, said as the forest bastion of Negros Occidental, the NNNP has a critical function for biodiversity and communities.

"We depend on it for our survival -- it gives us life-nourishing water, food on our tables, and it is our natural defense against disasters brought about by the climate crisis," it said.

A protected forest area, the NNNP is located in the northern mountainous region of Negros Island in the Visayas and is the ancestral domain of the Ata-Negrito tribe.

The NNNP is also home to endemic and endangered species of plants and animals.

For the Green Alert Network-Negros, the agencies that are supposed to protect it have trampled on its grounds.

The group recalled that on August 27, the Protected Area Management Board (PAMB) composed of mayors of covered localities and representatives from the Department of Environment and Natural Resources (DENR) have allowed the Department of Public Works and Highways (DPWH) to proceed with the road construction from Calatrava to Barangay Patag in Silay City traversing the NNNP.

"They have opened the floodgates to allow wealthy and powerful individuals to build illegal structures for the interests of business and their personal recreation," it said, adding that "all of this at the expense of the already depleted forests."

For the environment group, such a pattern of land occupation is already evident in Barangays Patag and Lantawan in Silay City, in Salvador Benedicto and other parts of the protected area where resorts and leisure parks are currently operating.

"We are disturbed that the very ecosystem that has given life to us is at risk from different projects, programs and activities initiated by private companies, organizations and individuals that were allowed by policies and laws by the government," the statement said.

"With the dwindling forest cover in Negros, we strongly declare that protecting it is not up for debate. Our forests are non-negotiable," it added.

The NNNP should be protected, preserved and conserved, the group said.