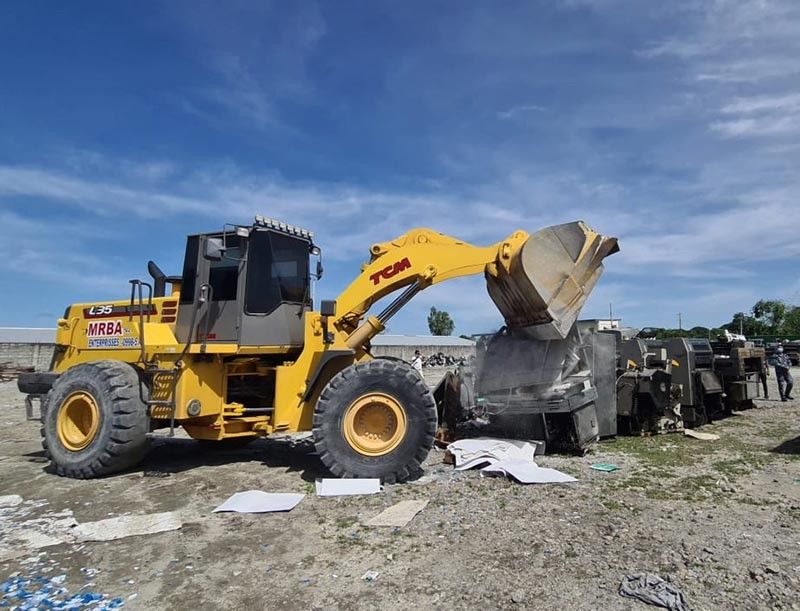 DESTROYED. A backhoe from the Bureau of Customs Port of Manila destroys printing and cutting machines, as well as cigarettes cases amounting to P21 million that were confiscated in a warehouse in Valenzuela City and brought to Green Leaf 88 in Porac, Pampanga last Monday, October 19, 2020. (Chris Navarro)

A NUMBER of cigarette manufacturing materials, including printing machines, worth P21 million and believed to be used in counterfeiting branded tobacco products were destroyed by Bureau of Customs (BOC) Port of Manila at the GreenLeaf 88 condemnation facility in Porac, Pampanga on October 19.

The items were seized at a warehouse owned by Michel Jamora along Maysan Road corner A. Cantillon Street, Valenzuela City in June this year following a forfeiture proceeding issued by a Manila court.

Filemon Ruiz, director of BoC ESS, sent samples of the confiscated items to Philip Morris International for confirmation but the tobacco firm said the warehouse is not authorized to print such materials in the country.

Jamora failed to show proof of payment of tax and duties of the imported machines that prompted the raiding team to seize all items found inside the warehouse. The raid was properly coordinated with the local government unit of Valenzuela City.

The seizure was covered by Letter of Authority 06-25-145-2019 issued by the BOC directing its personnel to conduct an inspection of the mentioned warehouse.

Green Leaf 88 is the only accredited non-hazardous disposal facility in Central Luzon by the Department of Environment and Natural Resources, said Robert Gaza, owner of the waste disposal company. (Chris Navarro)