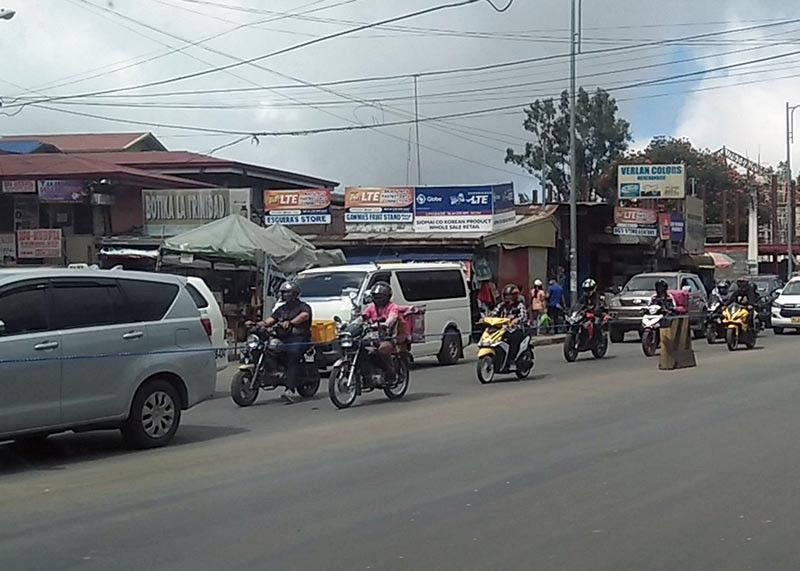 TEMPORARY BARRIERS. Motorists experience congestion from Kilometer 3 to Kilometer 5 after barriers were placed along the stretch of La Trinidad’s main road. The photo was taken Monday morning, October 19. 2020. (Photo by Lauren Alimondo)

THE experimental placement of road barriers along Kilometer 3 to 5 in La Trinidad, Benguet has drawn flak from residents and a town official, saying the municipal council did not approve such a move.

Councilor Nestor Fongwan Jr. said the municipal council, the policy-making body of the municipality, did not authorize the installation of road barriers.

“The traffic management board, chaired by the mayor and the vice mayor decided that. But we have to remember that the function of the traffic board is recommendatory. All actions of the board should be adopted by the council to make it official,” he told reporters.

During the council’s regular meeting on October 12, Fongwan said the move to place temporary barriers along the road was already conducted during the time of former Mayor Edna Tabanda.

He said the results of the experiment should be used as a basis on whether to pursue another experiment of placing temporary barriers on the road or not.

The barriers were placed on October 16.

After drawing flak for the installation of the rope and barriers, Mayor Romeo Salda on Monday, October 19, 2020, ordered the La Trinidad Municipal Police Station led by Major Cleff Vencio to immediately remove the barriers along the stretch of the road.

The chief executive said there is a need to conduct public consultation and the issuance of a municipal council ordinance or a resolution and an executive order for the installation of road barriers.

He added they are also waiting for the reply of the Benguet First District Engineering Office on their request for additional barriers.

“Issues relative to the inputs of stakeholders and safety concerns have yet to be resolved in a public consultation set on Thursday, October 22,” said Salda.

The La Trinidad Municipal Police Station earlier proposed the installation of plastic barriers along the stretch of Kilometer 3 until Kilometer 5, which was approved during a recent meeting of the Traffic Management Board on October 9.

Salda added the installation of the barriers is seen to ease traffic congestion in the area.

He said the placement of the temporary barriers will last for 60 days only.