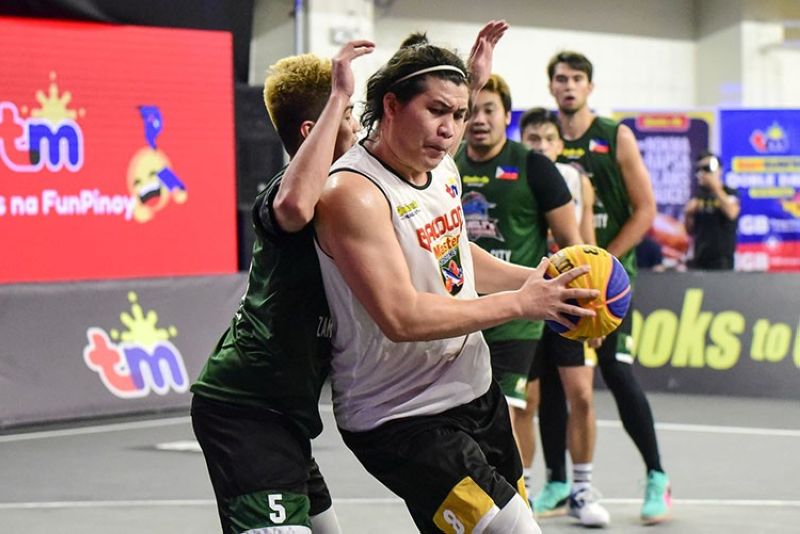 Former Cesafi stalwarts Alfred Batino, who is playing for Bacolod and Santi Santillan, who is suiting up for Zamboanga City, clash in this piece of action from the preseason of the Chooks-to-Go Pilipinas 3x3 President's Cup powered by TM. (Chooks-to-Go)

Zamboanga City-Family’s Brand Sardines showed its readiness for the regular season as it won the preseason tournament of the 2020 Chooks-to-Go Pilipinas 3x3 President's Cup powered by TM with a 21-17 victory over the Bacolod-Master Sardines on Monday night, October 19, 2020, at the INSPIRE Sports Academy in Laguna.

The finals was a fiercely contested match with Bacolod pulling to within one, 15-16, with less than five minutes to go before Munzon shot back-to-back two-pointers for a 20-16 edge.

Pasaol was then sent to the line with a chance to wrap it all up but missed.

After Chris Lalata pulled Master Sardines to within three, Pasaol atoned for his missed free-throw by scoring inside to secure the win and the P50,000 cash prize for his squad.

“This meant bigger for us because we lost,” shared Munzon after the game, referring to their upset at the hands of Bicol in the qualifying round.

“We learned to play every game like we mean it,” he added.

After that defeat, Family’s Brand Sardines sharpened its play and strung together three wins in a row, the most impressive being a 21-14 domination of its semis showdown with fellow contender Nueva Ecija.

All 12 teams will duke it out anew in the first leg on Wednesday, October 21, and will be followed by three more legs that will be played every other day.

Just like the preseason tournament, the squads will be divided into four groups in each leg with the top two advancing into the quarterfinals. From there, knockout bouts will determine the champion.

Finally, an eye-popping P1 million will be up for grabs in the Grand Finals of the FIBA-endorsed tournament slated for October 30. (JNP)