Mayors want Metro Manila to remain under GCQ until yearend 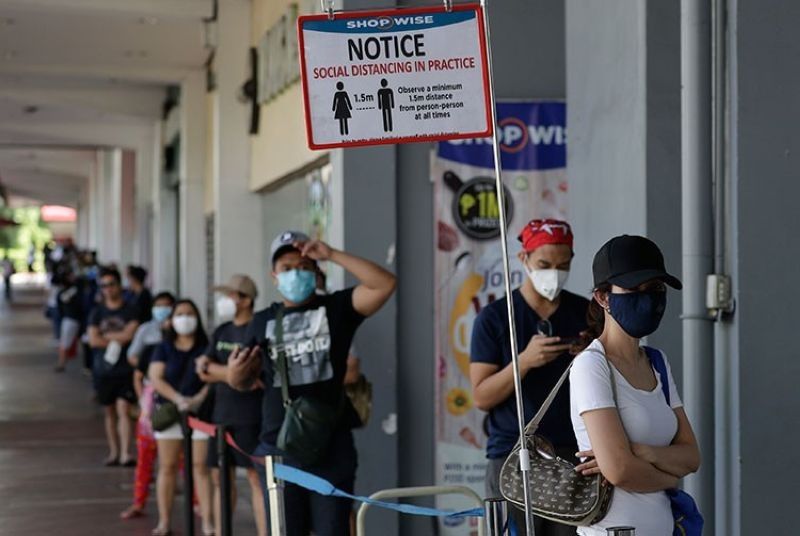 MANILA. In this photo taken in April 2020, a reminder stands beside a long line of people wearing protective masks outside a supermarket during a community quarantine to help curb the spread of the new coronavirus in Manila. (File Photo)

METRO Manila mayors have recommended the extension of general community quarantine (GCQ) in their areas until the end of 2020, according to Metro Manila Development Authority (MMDA) general manager Jojo Garcia.

But they have agreed to shorten curfew hours to 12 a.m. to 4 a.m. from the previous 10 p.m. to 5 a.m., except in Navotas City which requested to retain its curfew hours, Department of the Interior and Local Government Secretary Eduardo Año said Monday, October 19, 2020.

Año stressed, however, that no Christmas parties would be allowed.

Instead of the allowed 15 to 65 age range outside their homes, only those 18 to 65 will be allowed to go out in Metro Manila, Año added.

(We have drawn up a plan for GCQ until the end of the year because the mayors believe it would be easier to ease restrictions gradually than shift to MGCQ immediately.)

(Everything will be done gradually. Our mayors have been complying with the requests of the economic team.)

Año expressed support for the recommendation, saying this would allow the government to sustain its gains in the fight against the virus.

Even while under GCQ, Metro Manila mayors have vowed to further ease quarantine restrictions gradually to support efforts to reopen the economy.

(Our numbers have improved. But if we don’t watch out, these could spike again. Christmas is approaching and people want to party. But if we allow this, the gains we have achieved would be erased and the numbers would spike again.)

During President Rodrigo Duterte's weekly public address over Covid-19 issues on Monday, October 19, 2020, Año said Metro Manila mayors have agreed to adjust curfew hours from to 12 midnight to 4 a.m., except in Navotas City.

He also said the conduct of Catholic Masses will be allowed up to only 30 percent of a church’s capacity. (SunStar Philippines)