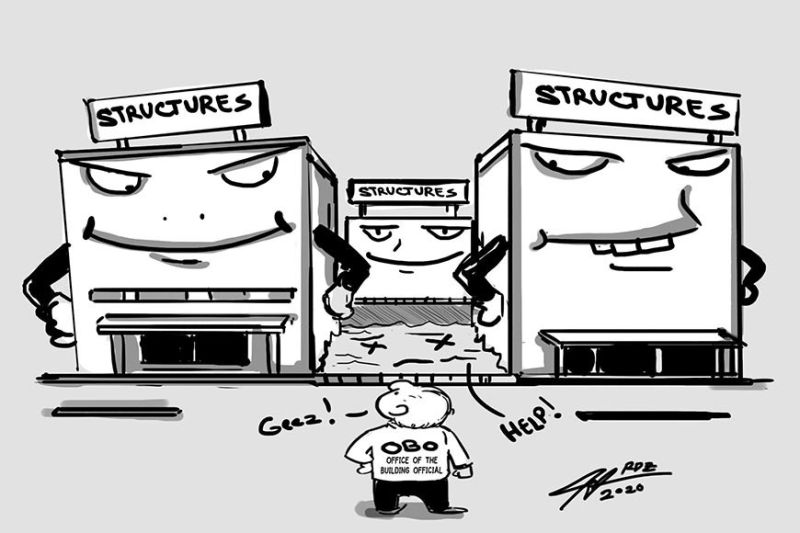 IT ISN’T as though the 60 structures that the City’s building officials have found to block the waterways suddenly sprang forth in magical ways. These obstructions are products of incremental negligence by the supposed overseers of construction matters in the city.

Office of the Building Official (OBO) Chief Florante Catalan on Monday, Oct. 19, 2020, was to present his agency’s report, which identifies these residential and commercial structures, mostly along Colon St. and Gen. Maxilom Ave., to Cebu City Mayor Edgardo Labella.

On Oct. 13, torrential rain, which according to the weather bureau dumped over 5,000 barrels of rain per square kilometer in the city, caused severe flooding even in areas never before imagined in a state of inundation, such as Gen. Maxilom Ave. The massive flood took the lives of three people in Cebu City and displaced over a hundred residents in Mandaue City. That is at once saying it is no matter to be taken lightly.

Again, it isn’t as though these structures sprang forth overnight. It is impossible to imagine that, in the process of running the public paperwork involved in the construction of these buildings and houses, there never was any chance for these officials to conduct ocular inspection on these sites.

Catalan is now saying that those who fail to remove these obstructions will suffer litigation. “If they don’t remove (it), the City will file a case,” said Catalan in a SunStar report by Jerra Mae Librea.

Article 638 of the Civil Code says that “the banks of rivers and streams, even in case they are of private ownership, are subject throughout their entire length and within a zone of three meters along their margins, to the easement of public use in the general interest of navigation, floatage, fishing and salvage.”

Article 52 of the Water Code also states that “no person shall be allowed to stay in this zone longer than what is necessary for recreation, navigation, floatage, fishing or salvage or to build structures of any kind.”

It is good that Cebu City Councilor Jerry Guardo had called for clarification if the DPWH issued permits for the construction of these structures. That should be one step towards holding into account people who allowed these structures to be built in the first place.

Mayor Labella must also push for accountability. We understand that some of the structures pointed out by the OBO have been in existence for a long time and are common public knowledge.