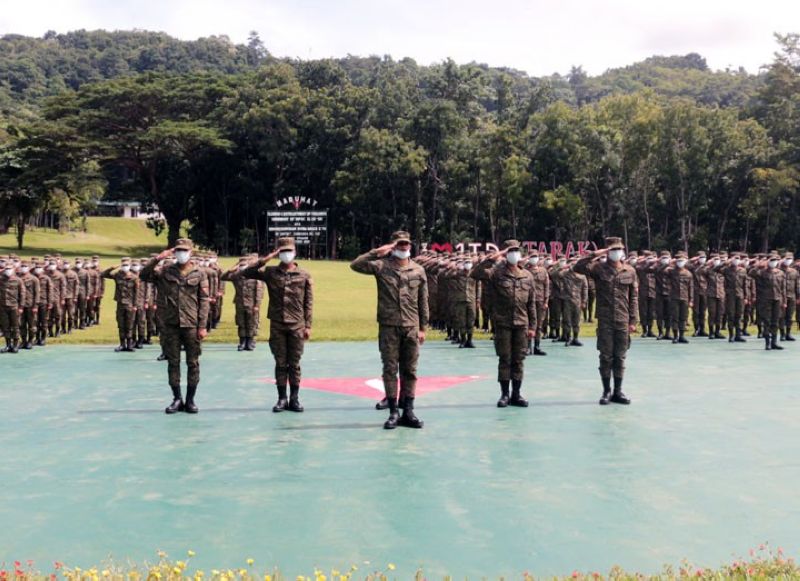 ZAMBOANGA. A total of 210 new soldiers join the ranks of the Army’s 1st Infantry “Tabak” Division after they graduated Monday, October 19, from the rigid Infantry Orientation Course. A photo handout shows the new soldiers, with ranks of private, in formation during their graduation ceremony. (SunStar Zamboanga)

THE front line of the 1st Infantry “Tabak” Division (ID) got a boost as 210 new soldiers graduated Monday, October 19, from the rigid Infantry Orientation Course in Camp Major Cesar Sang-an that houses the 1ID headquarters in Labangan, Zamboanga del Sur.

The Infantry Orientation Course was developed and pioneered in 1ID last year, which reformulated the former Jungle Warfare Mountaineering Orientation Course. The 1ID is the premier commander of the Philippine Army.

Major General Generoso Ponio, 1ID commander, has reminded the new soldiers how serious their endeavors are and urged them to focus on performing their duties, especially during combat operations.

“As a member of the Philippine Army, the people look up to you as a soldier with virtues of honor, patriotism and duty,” Ponio said in his message read by Brigadier General Bagnus Gaerlan, Jr., 1ID assistant commander, during the graduation ceremony.

Ponio further reminded them to always be ready to fight, serve and secure the front line as well as the constituents.

Yu congratulated the new soldiers and expressed her appreciation to the troops for the commitment and sacrifices to the country.

“You have our utmost trust and confidence. Of all the professions, your job has the most dedication because your life is always at stake,” Yu said.

The new soldiers with ranks of privates will soon be deployed to the line units of the 1ID in the region. (SunStar Zamboanga)