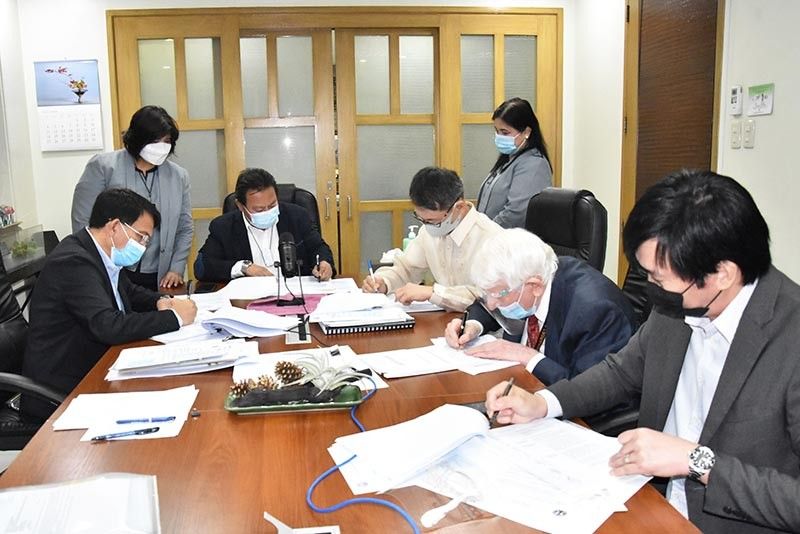 CONTRACT SIGNING. Officials sign the agreement on the detailed engineering design (DED) activities for the Bataan-Cavite mega bridge project that will be carried out in the next 15 months. (Contributed photo)

THE Department of Public Works and Highways (DPWH) is about to bridge the travel gap between the Provinces of Bataan and Cavite with the Bataan-Cavite Interlink Bridge Project.

DPWH Secretary Mark A. Villar declared the start of detailed engineering design (DED) activities for the mega bridge project that will be carried out in the next 15 months.

“This Bataan-Cavite Interlink Bridge Project will provide a permanent road linkage between the two provinces in Central Luzon and Southern Tagalog Region in order to reduce the journey time and ease traffic congestion through Metro Manila”, said Villar.

Other than reducing travel time and lower vehicle operating costs, the Bataan-Cavite Interlink Bridge Project will provide opportunities for expansion outside Metro Manila for economic growth as well as support the development of seaports of Cavite and Bataan as premier international shipping gateway to the country, Villar added.

As authorized through a memorandum by Villar, Undersecretary for Unified Management Office Operations (UPMO) Emil K. Sadain signed on Tuesday, October 20, 2020, the contract agreement of consulting services for the DED amounting P3.03 billion with the bid winning consultants procured by ADB.

According to Sadain, the DED scheduled from November 2020 to January 2022 will be funded by additional financing for the Infrastructure Preparation and Innovation Facility (IPIF) under a signed loan agreement last December 2019 between the Asian Development Bank (ADB) and Department of Finance.

The soon to be largest and longest iconic bridge will be the faster way by land from Cavite to Bataan and vice versa with motorists directly traveling between Central Luzon and Southern Tagalog, said Undersecretary Sadain.

The present five-hour travel time will be reduced to 20 to 30 minutes with 60 kilometers per hour speed with the Bataan-Cavite Interlink Bridge, Sadain added.