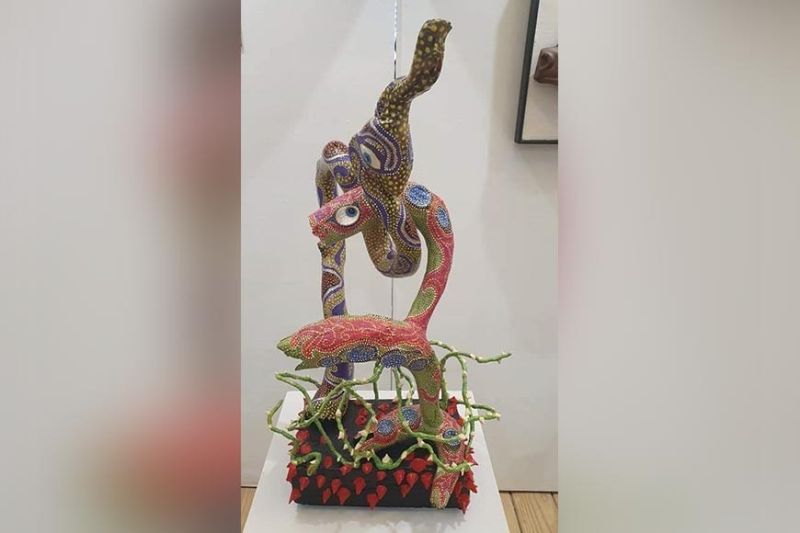 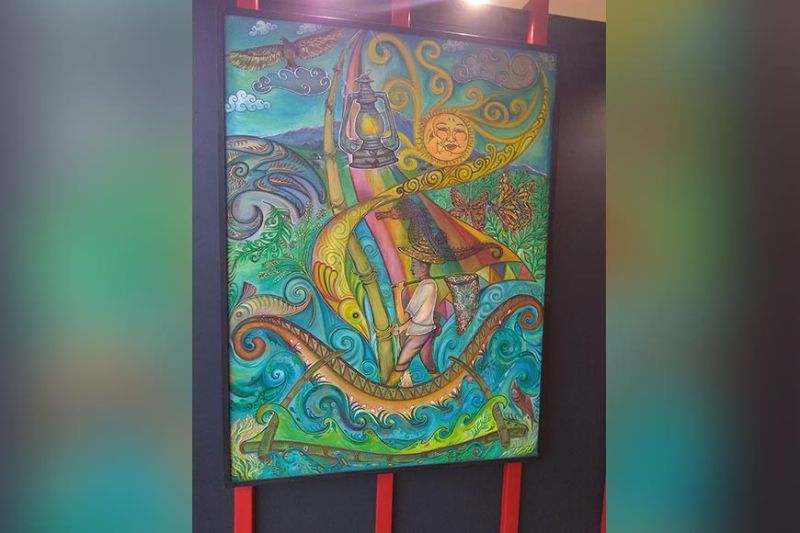 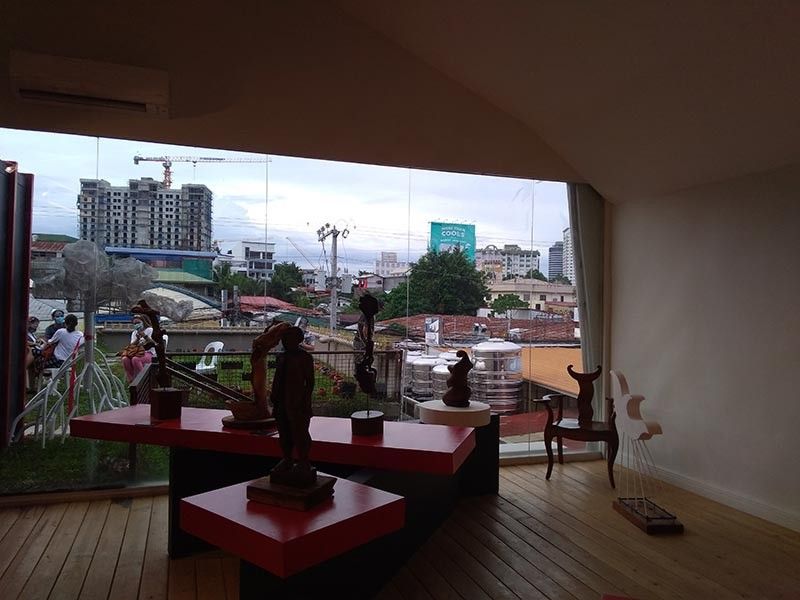 ALGIE Intapaya’s trophy-like sculpture Haring Ibon is a textbook example of art without introspection, the artist evidently limiting himself to established icons of his subject: In order to show "Davao," he showed the Philippine Eagle, mounted on a perch decorated with images of Mt Apo, the durian, the Waling Waling, and a man wearing the Tongkuu.

Points for rootedness to locale but not much on originality and concept.

Worse, the portrayal of the man with the Tongkuu – a stereotypically Lumad person – amidst images of plants, animals and nature risks sending the message that the Lumad are wildlife, part of the "exotic things" that make Davao "special."

This is no exaggeration – here in "savage Moroland," the dehumanization of the Lumad and Moro is a tradition as old as colonial presence (the "wild tribes," Fay Cooper Cole called them in 1913). If the artist is not conscious, he risks perpetuating this dehumanization. And because Settler artists are not conscious, of course that’s what many end up doing.

Not every Settler artist dehumanizes their Lumad and Moro subjects of course, and even those that do often do so unwittingly. In many cases, the depiction is meant as a celebration and communing with these culturally rich communities. Sometimes, such attempts succeed.

But charming as these attempts may be, Kulit Kultura also shows that Mindanao Settler artists are at their best when they confront their own Settlerhood, using its realities as subjects.

Bong Espinosa’s Fisherfolk’s Journey, while using the vinta, has at central character a Settler (an image established with the salakot, rolled up slacks, and camiso chino), and above him a gasera, another Settler icon, evoking dimly lit payag nights in the early years of colonial resettlement.

Tangiday’s two finest works are gloriously Settler sculptures. One is a figure of a man wearing what looks like the Anting-anting vest once worn by members of the violent paramilitary cult Ilaga, which terrorized my part of Mindanao in the 1970s and 1980s. The figure, in the shape of an idol with a blank stare and with head covered in holes (a nightmare for trypophobes), evokes that eerie feel of Mindanao’s many Settler cults. This is only reinforced by the piece of metal jutting out of the figure’s leg, a stark reminder that this idol is actually made of scrapwood – a rich metaphor for how Settler mysticism too is often born from recycled and appropriated spirituality.

The piece shows how Tangiday’s Settler tendency to appropriate succeeds when he is true to his own Settlerhood.

Another piece by him in the same corner ((which industrial designer Jon Traya designed with the concept of a sacred space) takes center stage. It is a driftwood sculpture in the form of a crucifix. But displaying Tangiday’s tendency to end where the wood ends, much of the Christ figure’s limbs are absent. Like the Ilaga idol sculpture, this piece – reminiscent of Egon Schiele’s cadaver-like figures – evokes an eerie elegance. It is Christianized but in the raw, distorted, provocative manner I think characteristic of those living bajo de la campana in Mindanao, where Catholicism is controversial. The deep, earthy shade of seal brown to the wood only adds to this.

Shades of brown (wood or paint alike) evoke earthiness to reaffirm the Mindanao Settler’s closeness to the earth, a tendency many artists seem to show: they had the option of painting wood, or using other materials, but many artists chose to use wood, and to keep their wood’s natural colour, with some even using paint in different forms of brown for non-wood materials.

For many artists, this is given an added charm by hinting at the urban, evoking the liminal position Settlers play between the countryside of their agrarian ancestors and the cities which the settlements have now become.

Images of city life in Anoy Catague’s BOREDing Haus gain a rustic, undeniably Settler feel with his use of an old Sungka, what seems to be a distinctly Settler game in Mindanao (its use also offering subtle commentary on how traditional pastimes like the Sungka have been displaced by modern, often foreign-sourced distractions). Elsewhere, this urbanity is implied with metallic gloss which often contrasts with earthiness. Such are the paintings of Jag Bueno (which, upon first glance, look like they are made of copper). Bong Espinosa’s pun-titled Dancing Ladies also play around with metallic nature, mounting gold Barbie Doll-like figures bearing baskets of baby durians on pedestals of solid shiny black, themselves ornately decorated with shiny floral motifs.

Most strikingly perhaps is Hafid Millan’s two carabao skulls, flourished with geometric floral motifs (the same ones which lend the base of Bong Espinosa’s Dancing Ladies a hint of nature). The earth coloured carabaos look like they were given tattoos, and when one realizes that Millan, a dentist, used dentist tools to carve these patterns, the tattoo imagery is even further reinforced (a dentist looks similar to a tattoo artist when using their tools). Mindanao is where a dentist can become a tattoo artist for a carabao, the urban occupation communing with the rural icon through art.

Even Kulit Kultura’s curation reveals the tendency to celebrate the hybridization of urban and rural: the wooden sculptures work harmoniously with the backdrop of the green rooftop garden’s grass outside, but beyond is Davao City’s urban landscape, images of metal and concrete offering a striking contrast to the earthy, grass-framed art.

Settlerhood is the mastery of the two worlds of verdant rural and shiny urban, and Kulit Kultura celebrates that multiplicity.

Shiny, earth-shaded, and rooted, easily the most striking and most successful of artworks in the whole exhibit (and I predict what will be the most iconic) is Jag Bueno’s Diverse Identities, a composite of three women, one each from Mindanao’s three people’s, together forming the beautiful portrait of a woman. The left third has the woman wear a hijab against an okir backdrop, the right a Lumad Baliog with an ear piercing against a background of geometric patterns typical of Lumad textiles.

Like Bong Espinosa’s untitled painting, at the center is the Christianized Settler (we have found her again!). The Settler is identifiable not only because of the cross on her neck but also by that position of being at center – the Settler subconsciously setting themselves as point of reference. That position of center, while seemingly putting a premium on them, actually denies the Settler of space to flourish like the adjacent Lumad and Moro. The painting is a lovely allegory of the Settler condition, and it is striking enough to perhaps outdo Banjo Satorre’s iconic "Tri People" triptych.

If Bueno’s Diverse Identities (and Kulit Kultura in general) has any flaw, it is that it is too small. We want more.

And of course we want that more to be space where the Mindanao Settler can flourish.