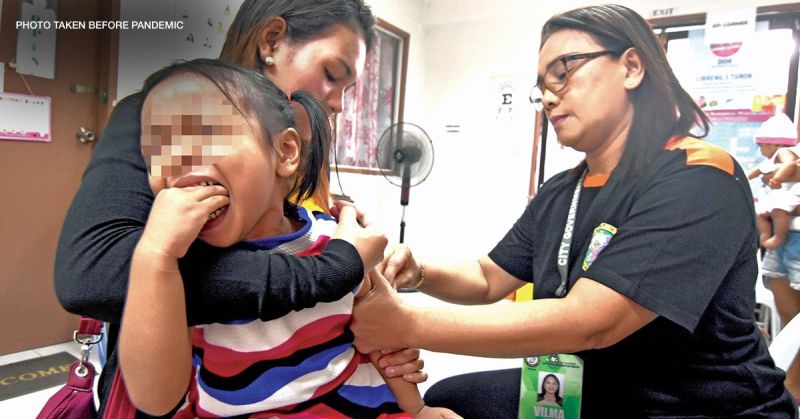 THE Department of Health-Davao Region (DOH-Davao) recorded a huge reduction of measles cases in the region in 2020 compared to 2019.

Based on the comparative data presented by DOH-Davao during a virtual presser, the region, as of the first week of October this year, recorded a total of 580 cases while seven have died.

Of the 2020 data, Davao Oriental has the highest measles cases with 263 and three deaths, followed by Davao City with 109 cases and two deaths, then Davao del Norte with 92 cases and two deaths. Davao de Oro, Davao del Sur and Davao Occidental have recorded 57, 44 and 15 cases, respectively, with no deaths recorded.

In 2019, Davao City topped the area with most measles cases with 628, including 10 deaths. This was followed by Davao del Norte with 354 cases, with five deaths; Davao de Oro with 200 cases and two deaths; Davao Oriental with 184 cases; and Davao del Sur with 112 cases. Both provinces recorded no death.

DOH-Davao Director Annabelle Yumang said most cases in the region this year were recorded during the first quarter or pre-Covid-19 pandemic.

SunStar Davao asked Yumang during the virtual presser if the reduction of the measles cases can be attributed to the strict quarantine measures imposed by the government since the second quarter of the year. She, however, was not able to respond but noted that there were "little" cases recorded during the pandemic period.

Yumang added that despite the huge reduction of recorded measles cases, there is still no room for complacency considering measles is a dreadful virus.

According to the World Health Organization, measles is a highly contagious viral disease, which is one of the causes of death among young children globally, despite the availability of a safe and effective vaccine.

Measles is transmitted via droplets from the nose, mouth or throat of infected persons. Initial symptoms, which usually appear 10 to 12 days after infection, include high fever, runny nose, bloodshot eyes and tiny white spots on the inside of the mouth. Several days later, a rash develops, starting on the face and upper neck and gradually spreading downwards.

"Dili mani buot pasabot nga magkumpyansa ta. Kinahanglan gihapon nga pabakunahan ang mga bata, nga wala kapakumpleto sa atong measles vaccines (this does not mean that we should be complacent. There is still a need to have our children vaccinated, especially those who have not yet completed their measles vaccine)," Yumang said.

With this, DOH will launch a region-wide Measles-Rubella Vaccination activity from October 26 to November 25.

Yumang said the activity will be rolling out vaccines to children ages nine months to 59 months old, or to children not beyond five years old.

The immunization activity is also intended for children who have not completed the two dosage measles immunization.

The health official said unlike in the previous Sabayang Patak Kontra Polio immunization when it was done through house-to-house, this measles vaccine drive will be done in a designated area such as a health center or barangay gymnasium.

She assured that they would impose health protocols to ensure that the drive will not result in further transmission of the novel coronavirus.