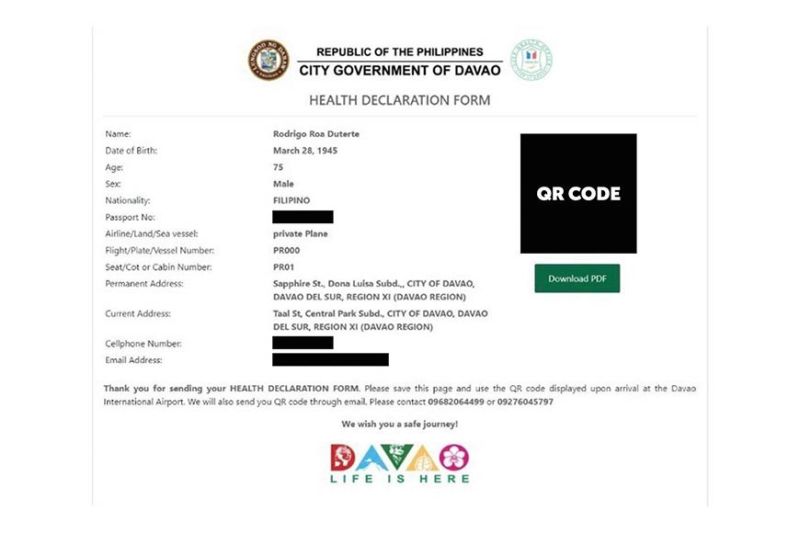 THE City Government of Davao has lauded President Rodrigo R. Duterte for complying with the requirement to present a 24 to 72-hour negative reverse transcription-polymerase chain reaction (RT-PCR) test result before exit from the Davao International Airport (DIA) recently.

They presented an RT-PCR test negative result dated October 18, 2020, in compliance with the City Government's airport safety protocol being implemented at the DIA to manage the coronavirus disease (Covid-19) cases here. His negative RT-PCR test was immediately submitted to the records section of the airport.

Davao City Mayor Sara Z. Duterte-Carpio said, "the City Government of Davao and the people of our city would like to thank President Rody for being our role model for everyone to follow."

The Presidential Daughter also said the president's compliance with the city's safety protocol at the airport serves as a reminder to all incoming passengers that nobody is exempted in observing the requirements and guidelines set to protect Davao City residents and those in the neighboring cities and provinces.

"This also emphasizes to everyone that the RT-PCR is still the best test available and cannot be substituted with rapid test kits or antigen tests," the mayor said.

Aside from securing a negative RT-PCR test result, issued not more than 72 hours from their scheduled flight to Davao City, inbound passengers from any airport of origin may also have the option to avail of the free RT-PCR testing at the DIA upon arrival.

But the mayor said in her recent Davao City Disaster Radio program that passengers who will opt to have their RT-PCR testing at the DIA will have to wait for 15 hours to get the result. She urged passengers bound for the city to have themselves tested before their flights to avoid inconvenience at the arrival area of the DIA. (PR)