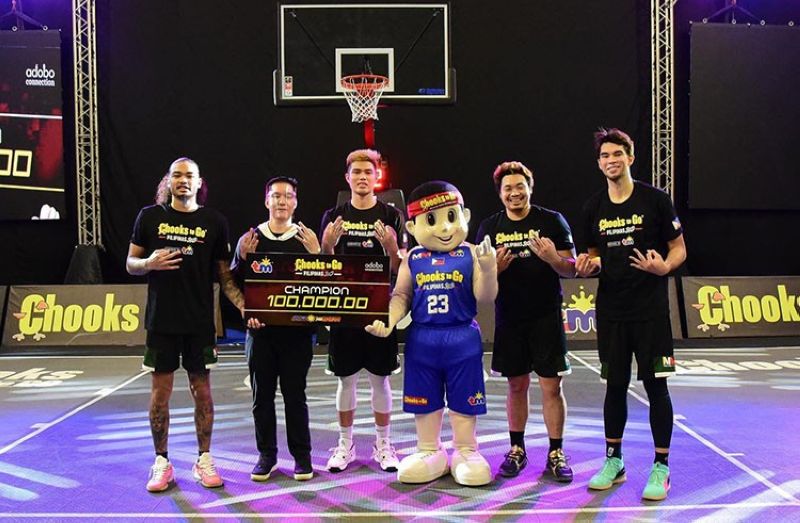 Cebuano Leonard Santillan (middle) and the rest of his teammates at Zamboanga City celebrate received a cash prize of P100,000 from league commissioner Eric Altamirano after winning the first leg of the 2020 Chooks-to-Go President’s Cup on Wednesday night. (Chooks-to-Go photo)

Joshua Munzon caught fire in crunchtime as he scored four of Zamboanga City- Family’s Brand Sardines’ last seven points to take down Butuan-Uling Roasters, 21-17, and capture the first leg title of the 2020 Chooks-to-Go President’s Cup on Wednesday night, October 21, 2020, at the INSPIRE Academy in Calamba, Laguna.

Butuan had Zamboanga City, which is composed of national 3x3 pool members Munzon, Cebuano Leonard Santillan, Alvin Pasaol and Troy Rike, on the ropes as they led, 17-14, with less than three minutes remaining in the game. But Munzon, the country’s top 3x3 player, took over as his two-pointer sparked a 7-0 run that powered Zamboanga City to the win and the title.

The 6-foot-2 Filipino-American coolly wrapped things up with a free-throw to complete their undefeated run through the first leg which rewarded them with P100,000.

“Again, it showed we can fight through adversity,” Munzon said after totaling 12 points in the Finals of this tournament. “We just stuck to our script. We took advantage of our advantages.”

While Munzon was taking time getting going, Pasaol kept the heavy favorites afloat and wound up with six markers. Rike and Santillan chimed in two and one point, respectively, for Family’s Brand Sardines who also reigned supreme in the preseason.

Even though they fell short, Butuan is P100,000 richer as well as Bounty Agro Ventures, Inc. president Ronald Mascarinas pledged the amount to whoever the opponent is whenever Family’s Brand Sardines makes the Finals.

Franky Johnson was limited to just three points, but overall, their runner-up performance is a huge bounce back from a preseason that saw them get eliminated in the quarterfinals.

The second leg of the FIBA 3x3-endorsed tournament kicks off on Friday, October 23, still inside the so-called “CalamBubble.” (JNP)